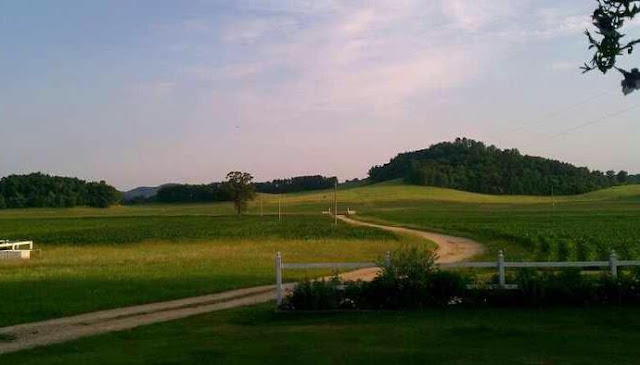 “I have to see a thing a thousand times before I see it once.” ~ Thomas Wolfe

The top photo is from the front porch looking south at Grandma Teenie's farm on the outside of the town in Western Wisconsin where I grew up. I don't know how many acres it encompasses, but there is an old farmhouse, a small barn, junky garage, an old two story granary,tractor shed and a couple of smaller outbuildings , In the back of the fields there is about an acre of pines she planted when she bought the place.  In High School I would do some odd chores for her; l built a small hay rack, strung barbed wire, shoveled the horse shit out of the stalls, white wash the corral fence, helped put the hay up in the barn.  That was a long time ago, when she was just Teenie instead of Grandma Teenie.  When you have a name like Blanche another moniker seems to work a little better.  She was actually my brother-in-law's mother, Uncle Billy, but again, that was when he was just Bill and seriously skinny,  long before he became Uncle Billy.and mostly thin.  I digress too much.

I am not sure when Teeenie bought the farm.  I think the early 60's.  She never lived there, but bought it as a place to keep her horses and other strange and abandoned dogs, cats, chickens, ponies and what-nots.  She leased the acreage out in exchange for hay and feed corn.  A place she could drive to easily in whatever beat-up pick-up she happened to own.  A spot she could muck around in wearing rubber boats and old clothes.  the pick-ups always had dents, the clothes, holes and invariably the boots had tire patches on them where she had managed to poke holes in them.  "That is when she felt most comfortable.  It was always hard to realize that she did have a significant amount of money; I knew she had inherited a fair amount, as did her husband, Grandpa Bill, not to be confused with his son of the same name, who would later become my brother-in-law, Uncle Billy.
Again, I digress.  The Deal was that  our families, mine and Uncle Billy's, got rather entwined back in the sixties.  Uncle Billy, back when he was just plain Bill, dated my sister for years before they finally married.  She became Auntie Bo, or Bernice, though her real name was Jean then.  Bill's sister, Kathy, sat behind me all through Catholic grade school, as the nuns liked to keep things very alphabetical.  In High School Kathy was a lifeguard at the pool on the army post near by, as was Bill and my girlfriend, Nancy, an my brother Chuck, who of course later became Uncle Chuck, and married a woman name Jean, who of course, was Aunt Jean.  To add to the mix, my father, Eugene, who was Grandpa Gene, raised pheasants out at the farm.  He was always good friends with Grandpa Bill and Grandma Teenie way before anyone was a Grandparent or Uncle or Aunt.  And, with all of that, I became the quasi-hired hand at the farm, tending not only to Teenie's chores, but those of my father,too.
It is only confusing if you want it to be, and it really is no never mind......other than the FARM rolled on year after year.
The families grew.  Aunt Bo and Uncle Billy produced Adam, Jonas, Emily and Eliot. I added Max and Miriam. There was also, Josh and Matt and Sal, then, Hattie & Will.  With that many grandchildren, why,gosh, Teenie put in a in-ground swimming pool, a gazebo an a barbecue pit. "Marvelous," is how she put it.