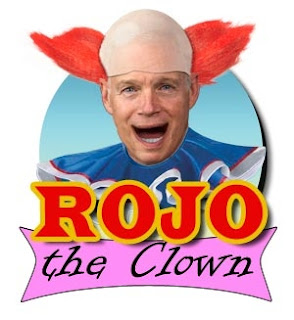 Well golly gees&Stuff..... our Senator from Wisconsin....is trying to make political gain from the Benghazi thingee, which, truth be told, was very tragic and must be addressed, but good old Ron Johnson was more intent on attacking Hilary Clinton and, through inference, the Obama administration.

OK....so after Hilary rather told him his questions were shallow, that he didn't understand what he was asking and really didn't have a grasp of foreign affairs (my take on it, see), Johnson gives an interview with USA Today in which he says,

"To answer Secretary Clinton, it does make a difference. It matters enormously for the American public to know whether or not their president and members of his administration are on top of a crisis and telling them the truth."

TELLING  THEM THE TRUTH ?   Now, that is what Ron Johnson has carefully avoided.  Not that there is scandal, or evil doings or any such....there isn't, but the real deal is Ron Johnson has, for the last three years let others pass HIM OFF as
someone he isn't.

He has let others, at introductions at political rallies and speeches describe him as an entrepreneur, a successful businessman who built a business from scratch and all sorts of similar blather.  He never corrected them.  The truth is .... Ron Johnson married into money and his father-in-law gave him a cuchy job in a business his father-in-law started.  None of that is a big deal.  Nothing illegal, but it is all common knowledge.  Ron is from my home town.  Everyone knows this stuff.  Ain't no deal.

Ron's Father-in-law, Harold Curler, started a company called Curwood in about 1958.  Plastics and packaging.  It would evolve into what is now Bemis Corporation, a Fortune 500 company.  Ron was fortunate to marry his daughter.  In 1979 Ron, at age 24, had failed to complete his MBA at the University of MN, so he moved with his bride to Oshkosh Wis to work for a company the Curler family had founded in 1977 in New London, Wi and moved to Oshkosh in 1979.  The company was renamed, PACUR, named for Harold's son, Pat Curler.  Ron was put on board to be an accountant.

"The company, formerly known as Wisconsin Industrial Shipping Supply, was founded by the Curler family in 1977 in New London to produce shipping pallets. A Feb. 16, 1986, (Oshkosh Daily)Northwestern company profile indicates the city of Oshkosh and its industrial-development arm, Chamco Inc., lured the company to Oshkosh in 1979 by securing a $75,000 federal grant to build a rail spur and by providing assistance with construction of a 20,000-square-foot factory in the North Industrial Park."

Now, Ron was 24 at the time....had washed out of grad school and, as other bio info likes to state, moved to Wisconsin with about $7,000 dollars.  Not much to put into a 20,000 foot facility, even by 1979 standards.  Now, there is nothing wrong, or smarmy about working for your father-in-laws company.  Harold also took care of his other sons and son-in-laws the same way.  There is truly nothing wrong with that.  And Johnson may have worked hard and diligently to make that company succeed, but there is something a little discomforting in allowing, as what happened during his Senatorial campaign to allow GOP State Rep. Mike Huebsch introduced Johnson as someone that “built a successful manufacturing company from scratch.”, or to allow others to hail him as some grass roots industrialist.  That he doesn't acknowledge is start in business, is well, just a little less than honest.,
To imply that a woman with a law degree, who has served as well as any. and better than some, as Secretary of State of the United States as less than honest because of a choice of words smacks of a sense of dishonesty when he has allowed his own background to be enhanced by others without making correction. Rather rude, as well.

A week after engaging Hilary in the Senate Johnson gave a speech at the Atlas Shrugged Society where he said,
"It's a real concern," Johnson said, when asked if he saw examples of the private sector "shrugging"—that is, wilting under the pressure of government regulations. "As I talk to business owners that maybe started their businesses in the '70s and '80s, they tell me, with today's level of taxation and regulation, there's no way I can start my business today."

Now that rather smacks of some kind of dishonest as well.  Especially, origins excepted, for a company that took Federal and City funding  to get launched.

Johnson is noted in Oshkosh for purchasing a statue of Atlas....now installed at one of his buddies' properties, Shrugging. 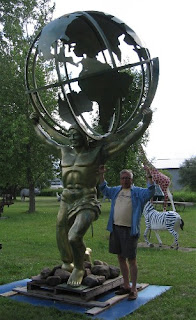 I tried to read that book a few times, in High School and College....and I concur with Dorothy Parker's review of the book....

”This is not a novel to be tossed aside lightly. It should be thrown with great force.”
oh well.

For another view of RON JOHNSON  please visit the link for a nice piece written by another Oshkosh Blogger, THE CHIEF

Things Considered and the Dirf-Mobile 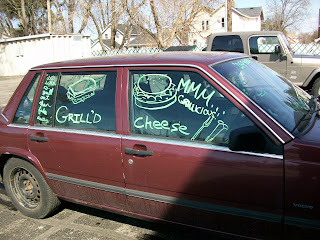 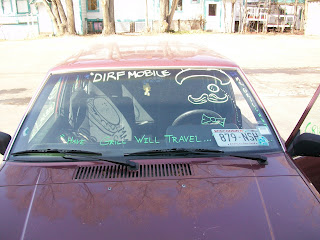 Now I forget exactly when my son bought that car.  Five years sounds about right.  Someone had parked it at the Bistro where he was a Chef.....not a 'short order cook' he told me many times...."I am a short order CHEF", he explained. " I have a magic spatula...and no one, NO ONE", he would explain while grinning and shaking a finger in my face, "can flip a gourmet pancake like I can !"
And frankly....no one else would buy a 1990 Volvo that looked like that one either.  The headliner was ripped and sagging, one hubcap was missing and another was pretty dented.  The trunk interior was a sprouting mushroom farm.  But...the tires were good, it ran well, the brakes were ok.....and it was under a thousand dollars.  Done deal.  His friends liked it...liked it so much they would come by while he was working and decorate it for him.  Due to his proclivity to mispronounce certain words-"Waldorf Salad was always said "Waldirf"....the car had a name.

When he decided to ove west and pursue a career that coincided with his college degree, the Dirf-mobile became his sister's.  I due believe the deal included some CD's, DVD's and a special hooded sweatshirt that she had coveted.  Whatever. The first thing that occured under the new ownership was a name change.  It became simply, "The Volvo".  She put another two years into it...as well as some new tires.  Alas and Alack....it succumbed to terminal transmission disease in late December.  Daughter is a college graduate and it took her no time at all to realize that a car that has no reverse gear is not a suitable vehicle for someone who delivers gourmet pizza.  No spatula for that kid.
Jumping ahead...a week ago this last friday....she made a deal on a 2003 low mileage Chevy.  The ;headliner was intact, but her cigarette lighter thingee didn't work..."so what..you don't smoke'  "but that is where I plug in the GPS and my IPod"  Some things are important.  She immediately inaugurated the new used vehicle witha 'girl's trip' to Milwaukee from which, on the return trip, whe discovered that through some evil connivance, the trunk would open, but then, not close.  Funny thing, huh?  The following monday I accompanied her back to the dealership from whence the thing came from and that was rectified post haste.  Then.....on thursday night what every parent dreads, fears more than anything else happened.

.........while delivering pizza at 1:30am, on slightly icy roads, at about 45 mph, a SUV with a extremely inattentive driver turned right into the rear right side of the Chevy.  Her car did a complete spin and the SUV then hit her again on the right front.  She was wearing her seat belt.  All the air bags deployed.
She's ok.  A bruised shoulder, a slightly sprained wrist and as she puts it...." I have a really sore left but cheek."  The other dirver was cited....twice.....no insurance.  Miriam's car is a total loss.  But she is not.  Her mother and I talked.....without her present...and a few tears of gaditude were shed....Our daughter was still alive and OK....scared the Bejeesus out of us.

I need to jump ahead.  The Kid had all the appropriate insurance, including Uninsured Motorist and a supplemental she was wise enough to buy that will totally pay off the loan she has yet to make a payment on and the deductible in this case, plus pay for a rental and additional money to help pay for the next vehicle. 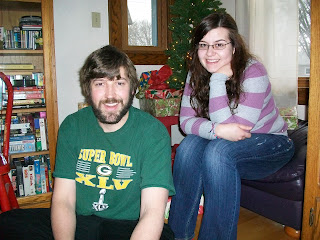