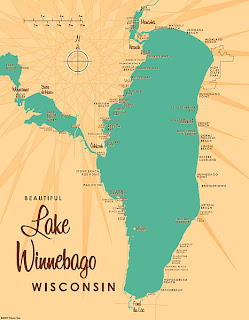 OK. Getting ready for the weekend. Planning on going out and walking on The Lake. It's what we call it, 'The Lake'. I think it is a rather catchy nick-name.
Well the thing is about 30 miles long and ten miles wide and covers a bout 137,708 acres, which would grow a whole bunch of soybeans, but, being a lake you really can't grow soybeans there. It is full of Walleye, Northern Pike, Large & Smallmouth Bass. Muskie, Bluegill, Crappie and Lake Sturgeon. Probably some other kinds, too, but I'll be damned if I'm gonna drown a buncha worms just to find out what-not is all there. Nope. Not me. If I want some fish I will walk into a restaurant and say, "gimmee some fish... and some fries and cole slaw too!"
Well, anyway, get this! The whole damn lake freezes in winter! All of it! Yupperz! Now the funny partof all that is Wisconsin is full of Norwegians, and Polacks and Germans who were really too stupid to figure out that Wisconsin is not "Out West" and they kinda settled in here. And, hey, get this.... they were not only so stupid that they couldn't figure out that this is not "Out West".... they were also too stupid to figure out that you can just walk into a restaurant and say "gimmee some fish!", so these yokels sit on the ice ---ON THE ICE--- on little boxes, cut holes in the stuff and then try to catch Walleye, Northern Pike, Bass, and all those other stupid fish. Boy! Go Figger about some folks, huh? Stupid! If you really doan wanna walk into a nice little restaurant and you really want frozen fish... gees, just go to the local market.... they sell them in the goddam freezer section. Well, enough about our inhabitants here. A real rosey bunch. They also deep fry cheese, too, but I doan wanna talk about that.

All right. Anyways. Being a sensible soul who does not sit on a box on the ice for my fish, I found my self sitting on a very comfortable bar stool at Oblio's a few days ago quaffing a very nice pint of pale ale with Billy Lang and Karl. Nice guys. They are both very intelligent and interesting and, if we forgive them both of their shared tendencies to laugh like sick horses, good company. I was bemoaning the length and severity of the current winter and generally complaining of the lack of outdoor activities available to a sensible man who does not sit upon a box on the ice when they both said... "Hard water sailing"! ? I have an inquiring mind. They elaborated. 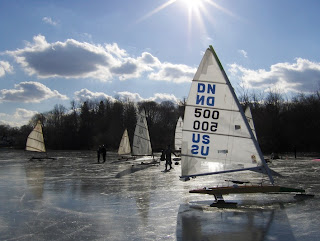 Basically.. you stick some ice skates on some sticks, add a sale and go zipping across the ice. 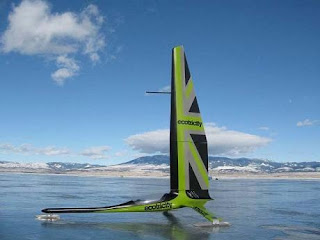 Or you spend mega-bucks and buy something that looks like it belongs on Mars rather than a lake full of frozen fish. 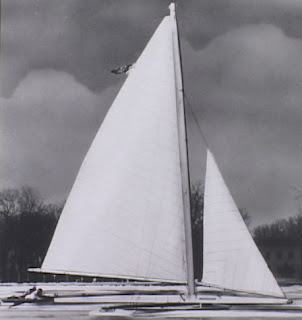 Now, the guys tell me that some of these boats go awfully fast.

The most spectacular claim is that by John D. Buckstaff, Oshkosh, who in 1938, apparently clocked 143 mph (230 km/h), in a 72 mph wind on Lake Winnebago His craft was a stern steered "Debutante", pictured left.

Now... one, I am going NOWHERE outside in a 72mph wind and certainly not out on the ice. I have fallen on the ice right outside my own door, thank you, and I truly do not want to experience falling on ice at 143mph.
But the talk has gone down.... I have my camera charged, dug out the binoculars... and am trying to find those funny little cleats you slip on your boots so you do notslip and fall on your ass. Hey! They don't call it 'ICE' for nothing! Sean may show up, and Karl and maybe Kuks. It could be fun. And it is literally a couple of miles from home. 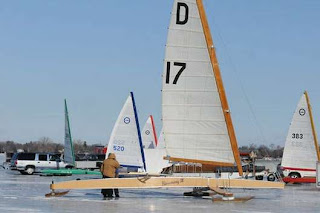 Now, there are worse things to do. And dumber. Like, trying to grow soybeans on a hundred thousand acres of lake...... or sitting on a box when the lake is frozen.
Yupperz. I do believe I will go l 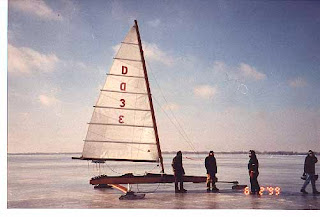 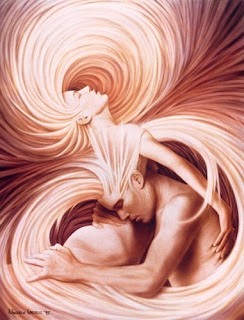 Tantric Sex V. making out in a tanning booth
My old college buddy, Uncle Rosie, usually sends group emails to the old-boy network that involves expensive cars, racing, ski trips yadda yadda & stuff. Not a whole lot of interest to me... but once in a while he sends info that is really funny.... such as.....
The Washington Post has published the winning submissions to its yearly contest, in which readers are asked to supply alternative meanings for common words.
The winners :
1. Coffee (n.) the person upon whom one coughs.
2. Flabbergasted (adj.) appalled over how much weight you have gained.
3. Abdicate (v.) to give up all hope of ever having a flat stomach.
4. Esplanade (v.) to attempt an explanation while drunk.
5. Willy-nilly (adj.) impotent.
6. Negligent (adj.) describes a condition in which you absent-mindedly answer the door in your nightgown.
7. Lymph (v.) to walk with a lisp
8. Gargoyle (n.) olive-flavored mouthwash.
9. Flatulence (n.) emergency vehicle that picks you up after you are run over by a steamroller.
10. Balderdash (n.) a rapidly receding hairline.
11. Testicle (n.) a humorous question on an exam.
12. Rectitude (n.) the formal, dignified bearing adopted by proctologists.
13. Pokemon (n) a Rastafarian proctologist.
14. Oyster (n.) a person who sprinkles his conversation with Yiddishisms.
15. Frisbeetarianism (n.) (back by popular demand): The belief that, when you die, your Soul flies up onto the roof and gets stuck there.
16. Circumvent (n.) an opening in the front of boxer shorts worn by Jewish men.
.... now that's funny
Posted by okjimm at 9:21 AM 10 comments: 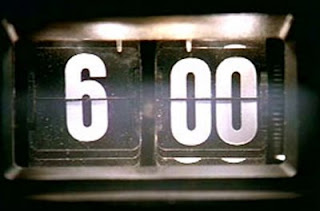 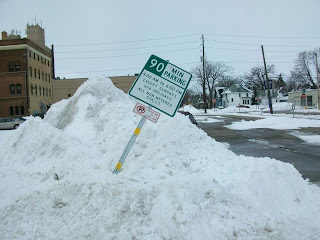 Do you know what today is?

Today is tomorrow. It happened.