Ok... so I haven't written anything for awhile....

See... it was a busy week...... they kept calling me from Washington DC to get my opinion on the budget.  I don't think they liked my suggestion..... 'Let Congress eat Ramen noodles for a week and see how they like it'..... but at least they had the sense to call an astute thinker like me.  'Course they didn't like my second suggestion much either..... "Let Congress eat Shit"..... well anyways... with some other time in my hands I delved into some research and discovered that, yes in-deedy-do, the Pope is Catholic and, with some exceptions for the ones in zoos, Bears do shit in the woods.  So there you have it.

Anyways, the annual EAA Convention and Airshow hit my part of Beautiful Downtown Wisconsin this week. Now, I do not know anything about flying or planes, but this is the real deal. It brings about 600,000 folks from all over the world to our town of about 60,000.  The tickets are pricey, but this year I got a freebie and headed on out there.  Saw some pretty nifty stuff.  Got to talk with one of the original Tuskegee Airmen.  Verrrrry cool. The guys was old and chatty... and incredibly interesting.  If you need to know more, and you should, check them out on the web.  Just saying. 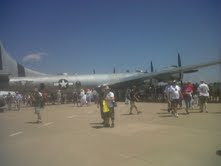 I also got to see the last flying B-29 bomber ... the same type that dropped the A Bomb. (hey, sorry about the shitty pictures, but stupid me left the camera at home and I had to use my phone.)

Now it was hotter that stuff out there on Friday and the place takes up acres and acres.  Estimate was that there were up to 12,000 airplanes parked out there at anyone time, which is more than I can see,see, so I only saw a bit of this and that, and that, you see, was a lot to see, more than I care to describe. I did get a chance to drop in to a booth for Cirrus aircraft... real nifty stuff... a brand new plane starting at $350K.... course I would hold out for their new jet...

... they are taking orders right now... starting at $1.5MM. Maybe with next years tax break I can order one. 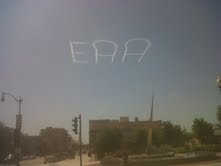 So for a week you could see and hear airplanes and jets all over the place.  Kinda helps you remember that it is a big wide world out there and no matter who you are, individuals only take up a very very small spot of it all..... which is probably a good thing, see, cause lately, when you turn on the TV, why, gosh, there seems to be a whole bunch of individuals that think they take up more space and importance than any one person really should.  And that is a shame.  Walking the grounds at the EAA show you realixe that, though some of them have a ton of money, the folks there, the big thing is everyone there had a common interest.  It is not unusual to run into someone who has been building their own plane, and spending ten years to do it.

So it was all fun  and interesting.
Saturday I biked the four miles or so to another gathering... at the Yacht Club... The Oshkosh South Side Ice Yacht Club.

Now, this was a gathering of quite different folks.  We live on a big lake and it has been an ice boaters Mecca for a long time.  Back in 1937 a Speed record was set on some good black ice... 147mph.

The club is over 70 years old and consists of  a modest old building that was moved to the spot in about the early 60's.  The public is always welcome... great view of the lake and a nice little harbor to pull a boat into.  No liquor at the bar... only bottle beer... and only a few varieties... and only $1.50 a bottle.  They serve fish on Fridays... a deep fried catfish plate can be had for $5.95.. with fries, Cole slaw and rye bread.  Saturday was a nice, modest gathering... must have been a hundred or so folks... talking fishing, boating and the Green Bay Packers.  Brats and Burgers and corn on the cob.  Local rock band playing oldies.  I checked into some ice boat prices on the net.... oh, say, from $700 to $4000 used, depending on how fancy you want to get.  I am sure there are new ones that might cost more.  I truly doubt if any would cost $1.5 MM.

But I guess it is not whether you fly through the air, or across the ice... but who you hang out with, what your interest is.  The air show was nice... I really liked it... but there was something about the Yacht club that was even better.... cheap beer bought for you by men that know your name and smile as they hand you the bottle.   As the commercial says.... priceless.
Posted by okjimm at 10:47 AM 12 comments: