Brother, can you spare some change....

Heard the cranes flying south this morning. A neat trilling sound, less raucous than geese.  Course, can't see them... but you know that they are up there.   It is a nice sound on cold days... and it gives the promise, too, that they will be back.  Seems that they are easier to see in the spring sky, but maybe that is just me.
It reminded me of stuff in the fall.... though, the crispness of the air, glasses fogging as you enter a warm house, the smell of my grandmother's apple pie, helping my mother grind the fixings for her turkey dressing.  The days are increasing shorter... the darkness now comes in late afternoon, the bare trees shake in a cold wind... and I am sad that another season is at an end.... and that I am older now... and that there will be a set amount of seasons left for me.  I shrug off the thought, cause it really is no never mind and there is nothing to do about it anyways.  Best to think of all the sounds, and smells, and foggy glasses in the past and be happy for them.

So....there are sounds... that fill a heart, a soul and even when they are sad, they are good, because whether I am here or not... the cranes will return.  It's all just changes... and changes will be good, if we want them to be.


.
I was born by the river
In a little tent
And just like the river
I've been running ever since

It's been a long, long time coming
But I know a change gonna come
Oh, yes it will

It's been too hard living
But I'm afraid to die
I don't know what's up there beyond the sky
It's been a long, long time coming
But I know a change gonna come
Oh yes it will

I go to the movie, and I go downtown
Somebody keep tellin me "don't hang around"
It's been a long, a long time coming,
But i know a change gonna come
Oh yes it will

There's been times that I thought
I wouldn't last for long
But now I think I'm able to carry on
It's been a long, long time coming
But I know a change is gonna come
Oh, yes it will
Posted by okjimm at 10:37 AM 11 comments:

Yessirree Bob... Whizconsin is a seasonal place.  Lots of them.  Just forget the regular Spring,Summer,Fall, Winter routine, cause mostly we only have two weeks of Spring, four weeks of Summer, two weeks of Fall and ten months of Winter.... or depending on the barstool wag youse is talking to...two seasons.. Winter & Mosquito.  But that is all wrong.  I know...because I am plenty smart and iffen youse all gotz a moment or two I will tell you about some of them, mostly because I can.

Now, Wisconsin is a mystery to most folks east of Lake Michigan and a myth to those west of the Mississippi, so this will be very clarifying to most of you.  Especially about the seasons.  We have bunches... and I know most people down there in Illinois think that the only seasons we gotz is pepper and ketchup but the truth of the matter is we have more that you can shakea maple stick at.... but for brevity's sake and not to overly tax my TAXED ENOUGH ATTENTION SPAN....which by the way is something RICK PERRY suffers from as well as me....but I don't care about RICK PERRY, cause he is an asshole and I am not, but if I have to bring him and me up in the same conversation I would say that I am a lot cuter, but not near as cute as Herm Cain, and my boobs are not as big as Michelle Whats-her-name and, what was I talking about? 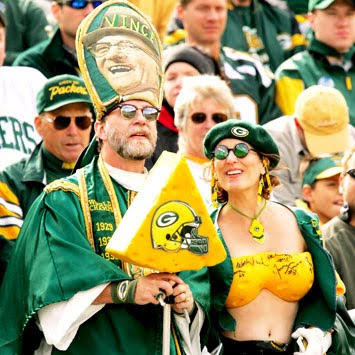 .. which runs from early August to the Super Bowl.  Now some around the country call it 'FOOTBALL SEASON' which is just plain wrong.  It is truly Packer Season,just to get that straight.  It kinda runs concurrent with summer, fall, winter, but that ain't quite right.  See, Packer Season is when we celebrate the life of St. Vincent the Lombardi and oh gosh is there ever a lot of events &stuff, see, like the Blessing of the Bock beer, the consecration of the Cheddar Bras and the weekly feast of the Holy Tailgate.

Now, I am not making this up... and iffen you call be a liar, why gosh I may just whack you over the head with a bratwurst and some pickled eggs or such.  Anywayz, it is THE MOST MAJOR season there is and I have a bunch of green and gold T-shirts to prove it.  Just saying is all. 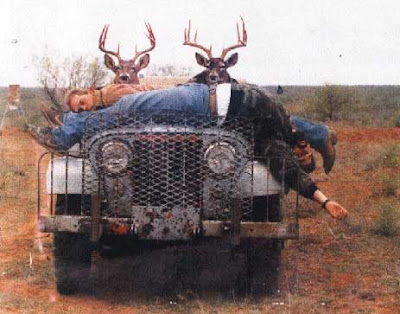 Now the next really big season is Deer Hunting.  Which kinda happens in fall and is a minor additive to the PACKER SEASON and if you are a good Packer fan and a good hunter, why golly, you get to wear your blaze Orange clothing to Lambeau field, which the goddam TV commentaters getz a big kick out of... but everyone knows most commentaters wouldn't know a Mitt Romney from a Jim DeMint or a Mint patty...which I kind of like myself, especially when I have had too much sauerkraut on my brat and I need to freshen my breath...which is mostly what I need to do after watching Republicans de-hate on TV.... well... where was I? 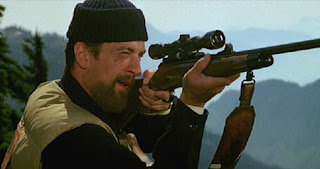 I heard DeNiro once came to Wisconsin and they made a whole movie about Deer Hunting... but I aint seen it, cause I don't hunt... heck, I don't even own a gun;;;;;;
Those guns are really noisy and if you are not careful with them, whygees, you could kill something!! Another thing about hunting season that most tourists doan know about is they have a special part of the state, which I am bound by law not to reveal, where they let the deer hide behind trees and then run out in front cars and kill unsuspecting Polacks who are up from Milwaukee. Nowthatmostlykillsthedeertoo....but I don't mind, cause it helps control the Polack population which gets out of hand from time to time.  But anyways I did go to deer camp once, cause I was told that Jimmy Frank kept a big porn collection at his cabin and we would mostly just drink beer and whiskey and play cards.... and indulge in another well respected season here in Wisconsin.... 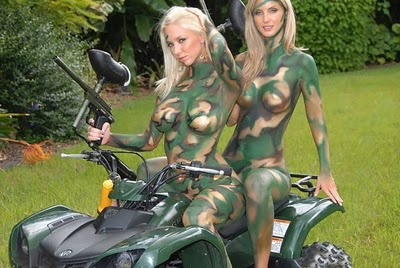 STRIP CLUB SEASON !!!!!  which is really only two saturday nights a year and run concurrent with PACKER SEASON and DEAR HUNTING SEASON...... now it was explained to me that you can only truly participate in Strip Club season if you are a happily married faithful male.... now the boy's let me go with them that time cause they said I was happily divorced and it is almost the same thing and I was a good sport about doing the dishes while they were out tramping in the woods.  So we are at the club, see, and there was this girl painted JUST like that swinging around on a pole.... well gosh,.. I asked her later...."How much is that there paint job cost?" and she said, "$500".... but I had to provide the soap which I really didn't understand and Tim Lee just laughed when I asked what she meant.  See, it must be a secret thing that only guys who go regular to Deer Camp knows about.

So, as you can see already there is lots of seasons here in beautiful DownTown Wisconsin...and we just keep coming up with more.  The newest one, which is pretty interesting and has brought some attention to my part of the World.... is the RECALL SEASON... which I am told started two days after the 2010 election and is celebrated mostly by Democrats and disgruntled  Liberals.... but even Republicans can participate..... why golly, see, the RECALL of GOVNER WALKER part of the season just started and the Head Republican declared...


“The Republican Party of Wisconsin has launched the Recall Integrity Center; a website designed to protect the integrity of the signature gathering process and be a valuable resource for Wisconsin voters who have witnessed any wrong-do...ing or suspect foul play by Wisconsin Democrats or big government union bosses. Voters can submit videos, recordings, photos and incident reports, which will be investigated by RPW staff and retired law enforcement and FBI agents, to ensure that any Democrats who attempt to use any type of fraud in order to meet the required number of signatures by law will be held accountable for their actions."

So The REPUBS are going to wear blaze orange and combine Recall Season with Hunting Season.... hey and I really liked, "Big Government Union Bosses"  which though I gotzta say, I hardly understand, cause the Republicans ARE the Controling Government and they are small minded... or maybe if the Union Boss is under 5'5" it's ok... course it also sounds like iffen it is Republican Fraud, it's OK...... and I really like "Recall Integrity" which, iffen I recall correctly hasn't been Center for awhile in the Republican Party.  Course, if you have a whole bunch of Hundred Dollar Bills, you can combine Stripper Season with the Recall Season and just slip some money into a Pole Dancing Conservative is how I thinking it would work.... but I'm also guessing they wouldn't look cute like those painted girls up dere in Hurley and thinking too that the Porn at Jimmy Frank's cabin would be more informative... and he left some Wild Turkey up there, which, get this, is also a whiskey as well as a bird, see, if I recall.

Anywayz.... The Packer Season, Recall Season, Hunting Season and Stripper season all coincide this Thanksgiving... Wowzers!  Kinda like Haley's Comet only shows up rarely and all.  And speaking of Stripper Season.... I want to take the paint off that old table in the garage, all I can do this year... the Republicans have left me short of dollar bills.