Ain't got much... but I sure gotta little 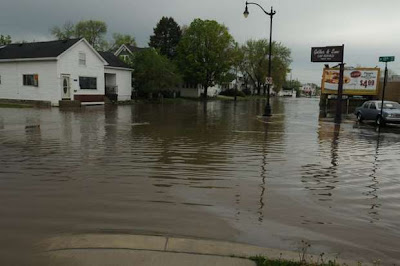 The old hometown... which is the same old hometown... received about four inches of rain early thursday morning in about a nine hour span.  Maybe everything a little flooded and wet and stuff. Backed up in basements and flooded some creeks and roads.
Didn't bother me none, but it did get us a mention on the national news this morning.  I forgot what show.

My friend Lee, who writes a column about beer and beer stuff for a local magazine... stuffed a picture of me in his last story.  Me made sure he got everyone of my grey beard hairs in it, too.  I will get back at him.

My bloggy friend Leslie at PARSLEY'S PICKS  WROTE AND ABSOLUTELY FABULOUS PIECE on the new McCarthyism spreading across America, aided and abetted by Fox Snooze.  It is worthy of a national publication.... please go read it!!!!

My youngest, Wonder Girl, graduates from College next Saturday.  Her Senior Art Show is next week.  I really can't wait. 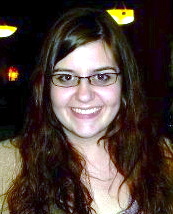 Her and her Mom have planned a small graduation reception.  I was told that my input was not valid..... gees, I don't know what would have been wrong with some Green Bay Packer balloons, some cheese and crackers and a keg of good beer.
Shheeesh.... women!

I put up that counter map thingee exactly one year ago.  It said that in the last year 20,833 folks visited this blog.  That can't be right, and what does it all mean?

OBAMA is a Commie! AND so is WISCONSin

First off... OK... A BIG hat tip to Tengrain at MOCK PAPER SCISSORS   for bringing this to my attention.  I guess that Fox thinks Obama's new slogan is.... oh the horror!..... Communistic!


Fox's Lou Dobbs: “ I'm Not Saying Anybody Is A Communist,“ But Obama 2012 Slogan, “ Forward,“ Is Tied To Communists, Fascists

Well, gosh.... Wisconsin has been using 'FORWARD" as a slogan since, ah, 1851... just a little pre-communismishtic, if you ask me.  OK, see, I guess I knew that all along, but me being me... dirty socialist slime scum that I am.... I always thought our motto was "EAT CHEESE OR DIE"

..... which you have to admit is much snappier and fits on a T-shirt real nice, but I'm guessing that if Old Lou Dopps found out, why gosh, it would probably make us all Commies here in da old Cheese State.  But then, see, I started thinking.... maybe Wisco is just full of Commies, what with a Motto like, duh, Forward!

Like, get this.... hey and I am not kidding....Saturdays in the fall they hold these really big Commie Rallies down there in the State  Capital of Madison.... and All the Commie youths, see, gather and wear Commie Red clothing and drink socialist beer and chant slogans like "Defense", which everyone knows was invented by Stalin,  you cannot make this shit up, see. 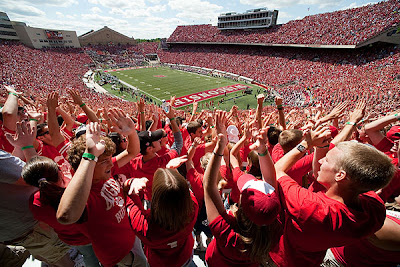 
when they did that State Quarter thing....a few years ago.... They even put FORWARD on the quarter! See!  More proof that I live in a Commie Socialist State!  Everyone knows we worship cows here and cows are all femme-nazi in a sisterhood of sour milk! 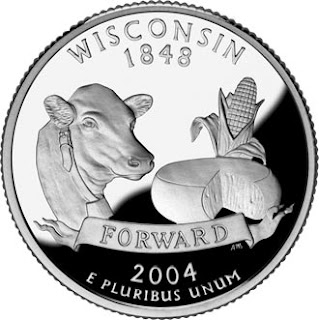 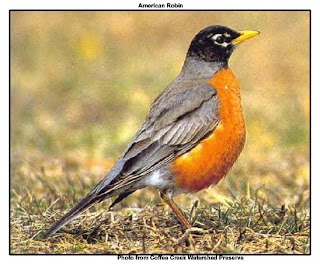 To say nothing of the fact that Robin was the name of that little masked gay kid that hung around with that pedophile, Batman.  Stuff...everyone KNOWS gays and pedophiles are Commines!  Just ask Lou Dabbs!  AND  Robin Hood was a well known socialist with all this 'give to the poor shit.  Can't make that up, No Sir!!!
And, get this too..... Wisconington has this Statue named FORWARD.....been outside the Capital since 1893 which just shows how Commie we are..... and, get this,   the Commie Socialist Teachers whose been doing all that protestations and stuff...hey.... they sacrifice Christian Babies and Christian Republicans right  in front of!!!! 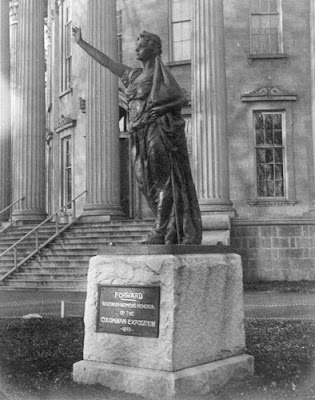 Boy and Howdy..... I sure hope Governutz Walker was watching Lou Dapps the other night and helps the Republicans get rid of Obama and the whole goddaminit State of Wisco.... that is.... iffen he can RECALL what he was elected for anywaz.
hat tip to Tengrain at MOCK PAPER SCISSORS  for bringing this to my attention..... oh the horror of it all. 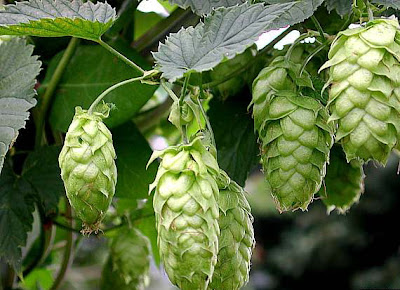 .Welllllll..... just hen I thought I had heard it all.... I hear something else! Ran into Al at Oblio's friday and he has a great new idea... After Shave that is made from hops.. (the stuff that gives beer flavor)
"Its very easy; just 14 grams of hops and one bottle of cheap witch hazel,let it sit in a jar two weeks,shaking daily,then funnel/strain back into the origional container/use it."
I will let youse all know how it turns out.  Or maybe you will be able to smell me headed your way.
Posted by okjimm at 11:58 AM 7 comments: