A view from the bridge 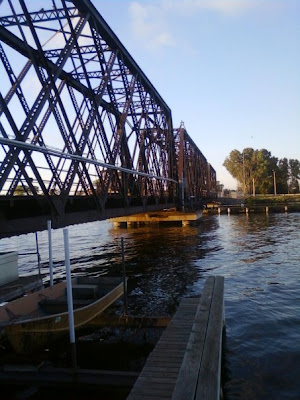 There is a neat clean grace in the serendipity that a brisk fresh walk about town can infuse in one's soul and then there is the just plain dippity in stopping for a cold beer afterward. Rather a Zen-dippity-dat.

A good do-dat walk is down to a spot by the old railroad trestle bridge by the mouth of the river. It was built in 1703 by the native Winnebago in anticipation of the coming of the White Men. I guess they figured that the sooner they could get the White Men north across the river the sooner the could fleece them in the casinos up north.

Most ttimes the bridge is swung open to allow the boats to go through but it is a neat thing indeed to watch it close, what with all the bells and flashing lights and all, and see the train roar through carrying all those un-employment checks &stuff. I fear that some day the bridge will not close in time and despite all the safeguards and signals and warnings the train will run right on through and crash smack-dab into the river. The greater fear is that that very precise thing will occur and I will not be there to witness it. It is that fear that compels me to walk to the river; the chance that a random, cataclysmic event of unique and particular proportions will happen and I will miss it.

Anyways. It is a conveniently close walk to a nice pocket of downtown that doesn't cost a dime and there is a cozy grassy spot to view the boats, wave to the fisherman on the south shore and check out the pelicans. Yupperz. Pelicans. Big White Ones. Downtown. Wing span like a huge honking kite. I have no idea what they are doing here, how they arrived or where they came from. I think climate and habitat change has brought them here. It happens. Someone said that is why we have so many opossum's in town now, too, where just a few years ago they were rare. Climate change rather bothers me. But I have been told that there is nothing to be afraid of and I just have an irrational fear.

Now, see, the case can be made that fear is irrational in and of itself and the the bigger the fear, the more irrational it gets to be..... which brings me to my biggest fear of all..... Grizzly Bears that deliver Chinese food.

Yes... it could happen. I mean, we now have opossums and pelicans were the don't belong, rather like illegal aliens, so I don't think, irrational fear or not, that it could very well be that we could have a bunch of displace Grizzly Bears right here in Eastern Urban Downtown Wisconsin! Now this is where my big fear kicks in. Follow me on this.

First of all.... they are coming. The bears. I know it. And when the DO show up... why would they NOT deliver Chinese food? Absolutely they would! See, all recent immigrants to this town who have a poor command of the Good Lord's English deliver Chinese Food! All of them! The Albanians, the Swedes, the Canadians. I'm guessing there is a shortage of Albanian and Swedish and Canadian restaurants to work for ... that's why they do Chinese.

So here it is.... Grizzly Bears speak very poor English and the restaurants around here, while serving some ghastly food... is very short on Grizzly Food...so naturally they would be forced to deliver Chinese! And one day I could just answer my door and there we be this huge honking bear there and he would say, " Here you Lo Mein." If I did not tip enough... why, gosh, he would just rip my head off! Now that is something to be very afraid of!!!! It could happen..........Really.....

...... and Congress could pass a Bill of Comprehensive Health Care for all United States Citizens.

But in the mean time I'm gonna order pizza. They are only delivered by punk-rock-skate-boarders with facial piercings.

Bass Fisherman. Thomas was never quite able to come to grips with why a Bass Fisherman would be any different than any other kind, but he was repeatedly told that it most certainly was. There were even tournaments all over Wisconsin, Minnesota and the Dakotas, other place probably, she explained to him, but those were the ones her husband went to. Hitch up his boat, give her a peck on the cheek and he would be gone for three days or more. Sometimes a week..

Thomas would try to imagine what a Bass Tournament would be like and he could only conjure images of middle aged men playing softball but using a fish instead of a ball. A paunchy, balding guy wearing a tractor-brand baseball cap arcing a fish toward and equally paunchy guy at home plate waiting to slug it with an aluminum bat. A whole outfield of men with jeans drooping around their ass cracks running around the outfield with small landing nets waiting to catch the pelted fish. The stands full of Bass Fishermen holding plastic cups of cheap beer cheering and spilling and slobbering.

One morning while he was away fishing and they were lying in bed together she told Thomas that her husband seldom went down on her.

"You wouldn't think a little head would be so difficult, you know," she complained. " He's like a puppy at a bowl of Gravy Train or something. Lick, slobber, lap, chew, slobber. Really! It's easier to just fake a good one and roll over."

It was meant to be complimentary to him, Thomas was sure, but the combined images of men playing baseball with a fish and her balding High School Principal husband, naked, and eating her pussy like a salivating dog rather put him off.

Maybe I should take up golf, he thought.
Posted by okjimm at 1:52 PM 1 comment:

I trully intended to watch WI vs Il on the tube today. Really. I was. But the damn weather is sooooooo nice.... and there are real, like, genuine puddles to splash in. Now how can BB on da tube compete with fresh puddles? Nope. I mean....

a puddle a day keeps my ex-wife away.
A puddle in time saves nine.
Don't count your puddles before they are hatched.
A fool and his puddle is soon parted.
Make puddles, not war.
Four score and seven puddles ago