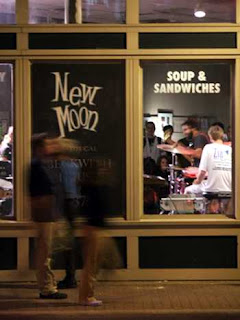 Stopped at the Moon for coffee the other day.  It's a cozy spot on the corner of somewhere and anywhere with little traffic lights set up on the intersections to tell you when it is ok to go to other places.  They serve up scones and muffins and other delicious stuff  with evening specials of poetry and music.  That kind of place.

So I run into my friend Mike.  He's a painter.  Houses, buildings, bedrooms and such.  That kind of painter, not an artist painter, but he has had his business for over 35 years and is well known for his craftsmanship and quality.  I have known Mike a long time now, though I cannot really recall when I first met him.  I think I was writing movie reviews for the college paper and he was writing music reviews.  Maybe that was it.  Anyways, he is a kindly sort, kinda long and tall with a smile that seems to remember every good record he ever listened to and a laugh that recalls every good beer he ever had occasion to drink.
"Jim," he says to me, " have I got a story for you!"  Now a guy that has put three daughter through college knows his stories, so I get my self a big mug of the hot and black and settle down.


"Seems like there was this painting contractor, " Mike started, "who was going door to door to solicit for house painting jobs.  But the guy was a crook.  He would wait till he found some old gullible folks, shoot them an incredibly cheap price, and then do a quick shitty job and take off.  He would buy cheap paint, or leftover paint, mix it with cheap additives to stretch it out.  Ripped everyone off."  He takes a bite of his egg& bagel, and I wait for him to chew and swallow.
"OK, " I impatiently said.
" Well, a couple of weeks ago he was up on the Northeast side of Appleton, over by Darboy, and I guess he conned some old lady into a  paint job.  Didn't scrap, didn't prime.... just mixed a whole bunch of different brands of leftover white paint from other jobs and diluted the crap out of the mix.  Well, when he was half-way done that storm hit.  Remember that one?"
" Ya, when we got all that lightning and about five inches of rain."
"Yup.  So when the guy comes back... gees I think his name was Frank Schmitz, or Scwartz... lemmee think, I'm having a moment here."
" Mike, I don't care what his name was... what happened?
"Right. " But by now Mike has take another bite of bagel and holds up a finger to let me know he has paused the story.
"OK???"
"Well, the paint had ran right down the side of the house... all over the drive, down the sidewalk... all the neighbors were standing around.  I guess it looked like a Dali painting.  He had to go hire someone to sand blast the drive to get the stuff off.  Oh, speaking of sand blasting... did you see the Mural Leif Larsen painted on the side of the old Franklin Milling building?  I sand blasted that one.  Gees, what a tough job."
"Mike!"
"Ok.... well the guy goes out and buys some more of the cheapest paint he can find.  Over at Badger building supply.  Joe told me about it, he's the salesman there, do you know him?  Used to hang out with Al Lewis at the old B&BTap? "
" No,  don't."
"Well, Joe is decent.  Anyways, Joe told me what he bought and that crap is not fit to paint a chicken coop, much less a house.  See, this is how I ran into the story... Joe told me."
"Mike!"
"Alright.  Well Joe told me that he also bought a bunch of cheap linseed oil.... he was gonna dilute the cheap paint too.  Gees, some guys should be thrown in jail for doing that kinda shoddy work.  Remember 2001 when the mini-tornado came through and all those shyster contract roofers were here.  I guess they busted a few of them... big fines and stuff.
" Are you gonna finish?"
He looked at my plate... and pointed to my half finished muffin."You gonna finish that?"
"Daminit, Mike!"
"Ok... Well...What happened is he got on the job.... slapped that crap paint all over the place...quickly loaded up his stuff and was at the door trying to get a cash, not a check, but a cash payment out of the old lady.  A reputable contractor will take a check.. but those cheap gypsy guys, oh no, they want cash... and then you never see 'em again."
I could tell he was getting off topic again.
"Ok.... did he get the cash, or what?"
"Well, just then, there was a sharp clap of thunder ... and lightning, again... and these huge clouds roll in and Frank, or whatever his name was... just looked at the house, and all the paint was starting to run again.  You sure you gonna finish that muffin?"
"I'm gonna finish YOU pretty soon!!"

"OK.... so he's at the door trying to get the cash, it's really starting to rain... he's knows that paoint is gonna starti running soon.... and then there is a huge flash of lightning...... 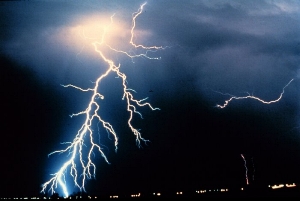 WARNING COMMIE-FASCIST RANT FROM THE RIGHT 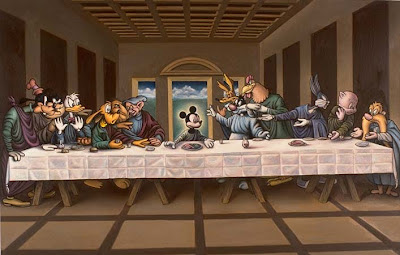 I caught the following off of FB.  At first I planned on just ignoring it.  It is one of those viral things that has been on line for the last few years.  Just the regular rant&roll with a little extra froth.  This one, though, was posted by someone I used to know a long time ago... and I am guessing that they are still a decent enough sort of person, but the tone startled me because they are also one of those Christian types..... who just can't love Jesus enough.  Now... sometimes I feel like an atheist, or an agnostic...gees, sometimes I feel I may be a Buddhist or a Jew..... but never could I embrace any religion or person who would go along with this kid of clap trap.  Check it out.

Put me in charge of WINZ food grants. I'd get rid of cash for potato chips or chocolate, just money for 50kg bags of rice and beans, blocks of cheese and all the powdered milk you can haul away.
If you want steak and frozen pizza, then get a job.

Put me in charge of Healthcare. The first thing I'd do is to get women Norplant birth control implants or tubal ligations. Then, we'll test recipients for drugs, alcohol, and nicotine and document all tattoos and piercings.
If you want to reproduce or use drugs, alcohol, smoke or get tats and piercings, then get a job.

Put me in charge of government housing. Ever live in a military barracks?
You will maintain our property in a clean and good state of repair. Your "home" will be subject to inspections anytime and possessions will be inventoried.
If you want a plasma TV or Xbox 360, then get a job and your own place.

Put me in charge of compulsory job search. In addition, you will either present a check stub from a job each week or you will report to a "government" job.
It may be cleaning the roadways of trash, painting and repairing public housing, whatever we find for you.
We will sell your 22 inch rims and low profile tires and your blasting stereo and speakers and put that money toward the “common good..”

Before you write that I've violated someone's rights, realize that all of the above is voluntary. If you want our money, accept our rules.
Before you say that this would be "demeaning" and ruin their "self esteem," consider that it wasn't that long ago that taking someone else's money for doing absolutely nothing was demeaning and lowered self esteem.

If we are expected to pay for other people's mistakes we should at least attempt to make them learn from their bad choices. The current system rewards them for continuing to make bad choices.

AND While you are on Gov’t subsistence, you no longer can VOTE! Yes that is correct. For you to vote would be a conflict of interest.....You will vote for a ‘welfare’ Govt. only.
You will voluntarily remove yourself from voting while you are receiving a Gov’t welfare check. If you want to vote, then get a job.

I had more planned to say.  I just can't find the words.  And they call liberals 'Socialists'?

I am just sad, really, and in need of a beer.  Might make me more christian.
Posted by okjimm at 1:55 PM 8 comments: 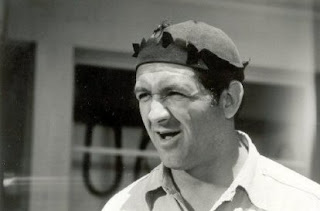