I'll see your Romney and raise you one Rand 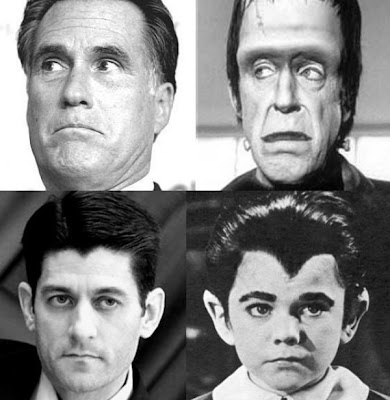 "Career politicians got us into this mess and they simply don't know how to get us out." ~ Mitt Romney 2011

Born and raised in Janesville, Wisconsin, Ryan earned a B.A. degree from Miami University in Ohio. Following his studies, he worked as an aide to United States Senator Bob Kasten of Wisconsin, as legislative director for Senator Sam Brownback of Kansas, and as a speechwriter for former U.S. Representative and 1996 Republican vice presidential nominee Jack Kemp of New York. In 1998, Ryan won election to the United States House of Representatives, succeeding Republican Mark Neumann. He is now in his seventh term.

Paul Ryan is a CAREER POLITICIAN

“The reason I got involved in public service, by and large, if I had to credit one thinker, one person, it would be Ayn Rand.”

In her notebooks Ayn Rand worshiped a notorious serial murderer-dismemberer, William Edward Hickman, whose gruesome, sadistic dismemberment of 12-year-old girl named Marion Parker in 1927 shocked the nation. Rand used this killer as an early model for the type of "ideal man" she promoted in her more famous books.

oh boy... it could be an interesting fall.