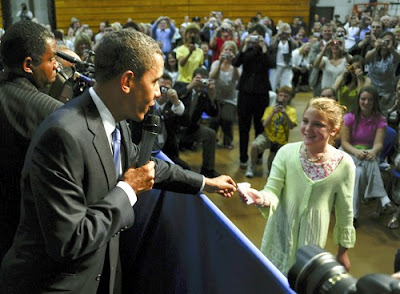 Associated Press
June 12, 2009
Green Bay, Wis. -- Ten-year-old Kennedy Corpus has a rock-solid excuse for missing the last day of school: a personal note to her teacher from President Obama.Her father, John Corpus of Green Bay, stood to ask Obama about healthcare during the president's town hall-style meeting at Southwest High School on Thursday. He told Obama that his daughter was missing school to attend the event and that he hoped she didn't get in trouble.

"Do you need me to write a note?" Obama asked. The crowd laughed, but the president was serious.On a piece of paper, he wrote: "To Kennedy's teacher: Please excuse Kennedy's absence. She's with me. Barack Obama."He stepped off the stage to hand-deliver the note -- to Kennedy's surprise.
"I thought he was joking until he started walking down," Kennedy said after the event, showing off the note in front of a bank of television cameras. "It was like the best thing ever."The fourth-grader at Aldo Leopold elementary in Green Bay already knew what she was going to do with the note: Frame it along with her ticket to the event. She said she'd make a copy for her teacher.Kennedy said she had never seen Obama before. "He's really nice," she said.


** OK. Maybe it's no big deal.... but here's the stuff...... About five years ago when Bush was running for re-erection he visited Oshkosh. Sorta. I mean, there was a 'set-piece' show.... and then the whole fucking motorcade 'sped' through town. Nobody really saw him, except for a few Republicans at the meeting. And some of Max's friends who happened to be working at Leon's 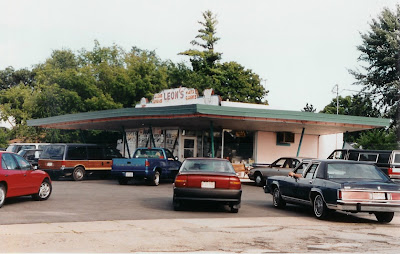 ...Well somebody must have told Bush that they have really good custard, and they do, so the Presidential motorcade pulls into to Leon's for a couple of cones ..

(Hey! I am really not making this up!) 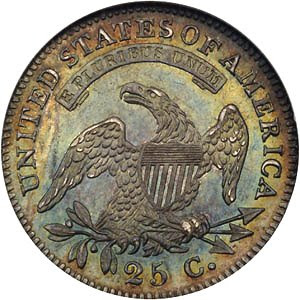 Well.... I guess he needed the spare change for the war or something..... rather than a tip for a poor High School Student. Cheap son-of-a-bitch!

Would you please write a note to my boss telling her that I need to leave work early today?

OKEE DOKE! I was really, really, really bored on the way to work this morning. A twenty minute commute is a long time for someone with ADD and my fertile mind was restless and I really was thinking of bananas and wondering what I would have for lunch and what I would do after the twenty minute commute back home and, gees, what ever happened to Nancy, the really, really cute girl I had a mega crush on in High School and what kind of beer she would like to drink and if she would still talk to me and if someone would already have made coffee at the office by the time I got there and why people don't like run-on sentences.

So, I decided to to get a band of gorillas together and start a war...... 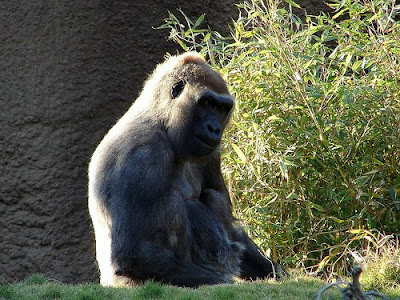 Ha! How's that for a casual link! Actually, not those kind of gorillas.... 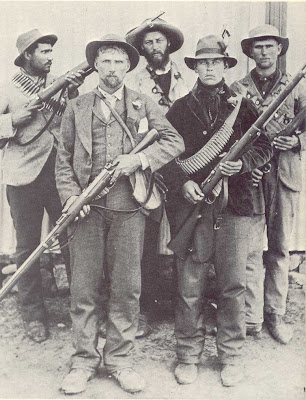 but this kind.... guerrillas..... the ones that just reek of justice and rights and freedom and liberty and unwashed clothes! Real Patriots!!!!! Men who would gladly enlist in a real war against...... say...... certain green vegetables like broccoli and asparagus ( both really vile green things if you ask me) 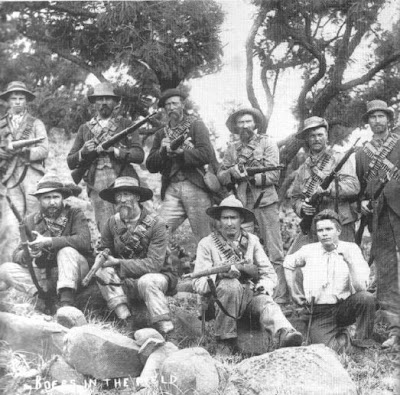 Yesirree Bob&Stuff! Get me a crew of some real bush-whackers to root out evil, inadequate manners and bad taste! Fight litter-bugs! Kill assholes who throw chewing gum on sidewalks! Eradicate dandruff! Battle Hemorrhoids! 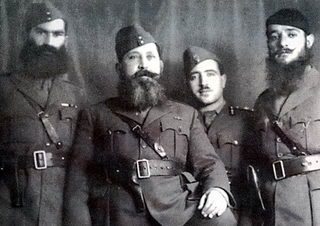 Yuppers! I wanna assemble a rabble of guerillas that will rip & snort and battle the enemy ..

(whoever that may be on any given day.... cause I figger that If I Really wanna be a guerrilla leader I have to be ready to fight anyone at anytime for any reason...... or even for no reason at all!)

..and still be able to hang around a good old campfire at night and drink beer and eat sardines out of k-ration tins and sing battle songs and wax eloquent about all the innocent bystanders and innocent other we may have snuffed during the day! Shit&Whiskers! I wanna kill, maim, pillage, loot, rape, rampage, annihilate, commit a little genocide, hate, burn.......................... 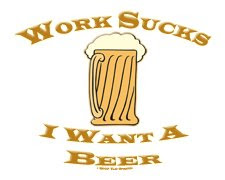 http://phantsythat.blogspot.com/
I'm mailing $5 to Oblio's in Oshkosh so you can have a beer on me.
I think it is a marvelous idea!
Oblios Lounge
434 N Main St
Oshkosh, WI 54901
c/o Grill Dog's beer fund.

After all there are Cheeseheads here that go to bed sober..... I don't want to be one of them!
Posted by okjimm at 8:09 AM 8 comments:

Wowsers! It came to my attention that I have had a blog for about a year. I think that is eleven months and two weeks longer than I should have, but seriously, who keeps track of that?
Anyways....
I think I have had a good time blogging. I've met a lotta people that I feel I can call friends...
Friendship is like peeing on yourself: everyone can see it, but only you get the warm feeling that it brings.
... and I have been inspired by all the deep thoughts and intellectual concepts that those friends have brought into my life that I often attempt deep thoughts myself....
Last night I lay in bed looking up at the stars in the sky and I thought to myself, where the heck is the ceiling.
... and I have met some really cool chicks, ah, women on the blogs who have introduced to me the true meaning of feminism....
Whatever women do they must do twice as well as men to be thought half as good. Luckily, this is not difficult.
.... and I met others who share the same kind of deep seated beliefs that I do...
Everyone needs believe in something. I believe I'll have another beer.
..and the blogs have taught me that there is a wide divergence of opinion and thought in our world and one must daily practice tolerance of those thoughts and opinions...
Everyone is entitled to their own opinion. It's just that yours is stupid.
... and boy have I read some funny stuff on the blogs. I think.
He who laughs last didn't get it.
.. and I got to meet a bunch of people with religious beliefs that, though I have none, coincide with my beliefs on how to treat people... with kindness and humor...
The opposite of the religious fanatic is not the fanatical atheist but the gentle cynic who cares not whether there is a god or not.
Eric Hoffer
When I told the people of Northern Ireland that I was an atheist, a woman in the audience stood up and said, "Yes, but is it the God of the Catholics or the God of the Protestants in whom you don't believe?"
Quentin Crisp
... and maybe lastly, but not leastly, I met some weird dude in Cleveland who not only emphatically said I should blog, but was 110% responsible for naming it, 'OK Jimm's Eggroll Emporium'

Dude, lemme buy you a doughnut! 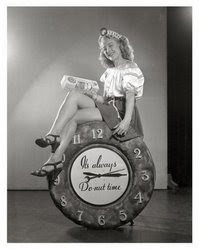 Ok. I really like trees. and bushes. and flowers. and all sorts of growing green thingees.
Not just beer, cheese and football. In truth, I am a pretty good gardener. I tried a 'Master Gardener' program at the local Tech School, but the assholes kept insisting on referring to different plants by their Latin names, which is really stupid; I have yet to hear a plant speak Latin, though if you really get drunk while gardening, it is very apparent that most species of Flora speak variations of Canadian.
So, I struck out on my own about twenty years and learned by trial and error. I became a King of Compost, a Prince of Perennials, a Sheik of Shade-plants, a Wizard of worms and a Duke of Dirt. Just sayin'. And I started hanging out with some folks who do gardening on my level..... sans Latin.
Yesterday I am in Waupaca, an hour north of town, where the consenus is that the north woods begin, and I am having a beer with my old room mate, Pete, and his brothers Dave and Dan. Invariably the conversation turns to growing things. And things that shouldn't be growing here...... and insects that shouldn't be here: milfoil, Box Elder, gypsy moths, emerald Ash borers, zebra mussels, tent catepillars........ and the one I hate the most.... Glossy European Buckthorn.

This stuff was imported as a hedge material because it grows quickly. Which is an understatement. If rabbits propagated as profusely as Asian Buckthorn, bunnies would rule the world. It sprouts early than native vegetation and has a longer growing period which in essence lets it crowd out native plants. It further has an abundance of seeds/fruits that offer no nutrition native birds or mammals and further acts as a cathartic to further spread itself, and sooner or later the native birds and mammals take off for better food. TheSome info from the WI DNR...
http://www.ipaw.org/invaders/buckthorn/index.htm

...I have cut this stuff, burned it, poisoned it ( and I really, really do not like to use chemicals in gardening) pissed on it and have even tried medieval curses. I may as well be tilting at windmills. Six years ago I completed a landscape revision for a client, an acre of natural woodland and a formal garden that was over-run with the stuff. I was out there last week and it is all back again!
Then, in the midst of all my frustration ( and a time out for a couple of beers) I realized that America is also the target of another kind of 'invasive species'..... The White-Faced-Lip-Flapper...... 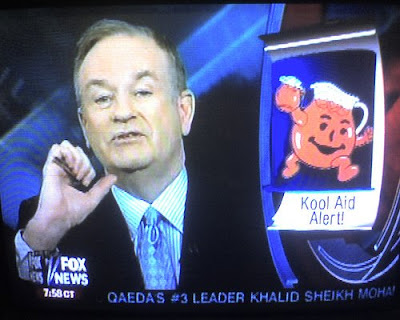 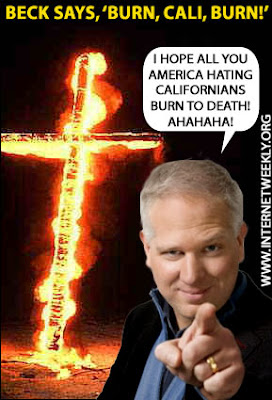 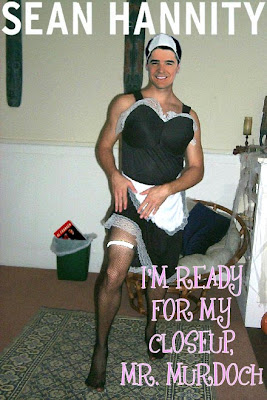 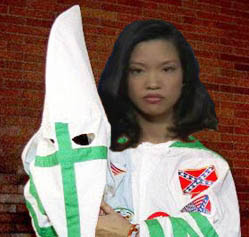 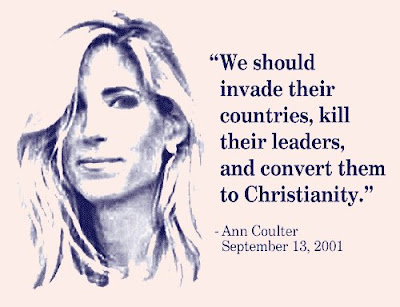 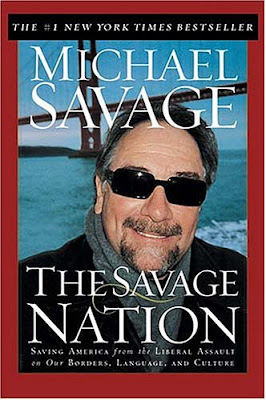 .... a species seemingly dedicated to make America a Mono-culture of hate, swill, verbal sewage and mediocrity. I best be buying a lot of weed killer this year.
Posted by okjimm at 8:24 AM 7 comments: