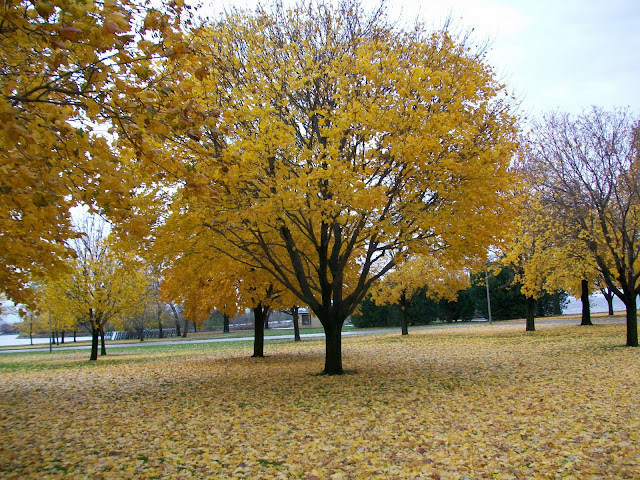 It sure is one of them kinda days..... why, golly&stuff!.... it must be almost 80! And the leaves are crisp and blowing and making this neato-keen kinda sound shuffling across the sidewalks.  So.... I have to be brief here... cause it is just one of those days that is just all together just too nice to sit in front of a puter screen.

Boy Wonder called me from Portland late in the afternoon yesterday.... he was in the downtown at the occupy Portland protest/rally. He was filming with Johnny B and said that he would send me a copy later.  Mostly..... he just held up his phone for about five minutes so I could listen to the chanting and the marching and the songs and stuff.  "Hey, Dad, does it bring back the good old days for you?"  Yes it did Bub. Thanks. 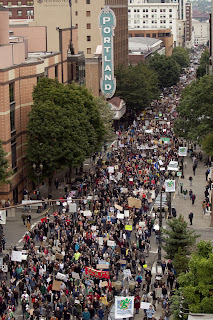 Haven't heard much from his sister lately.  Last semester of college and she has a lot of artsy-fartsy stuff to finish. She's a good kid.  Has never once asked me for bail money,
any ways..... 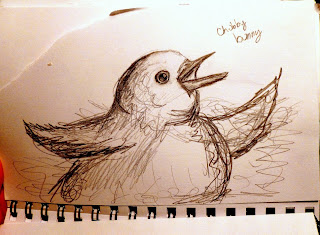 it just is just a beeeeuuutiiiifulllll day..... way too nice to sit inside looking at a computer screen...... and besides.......
it must be happy hour somewhere. 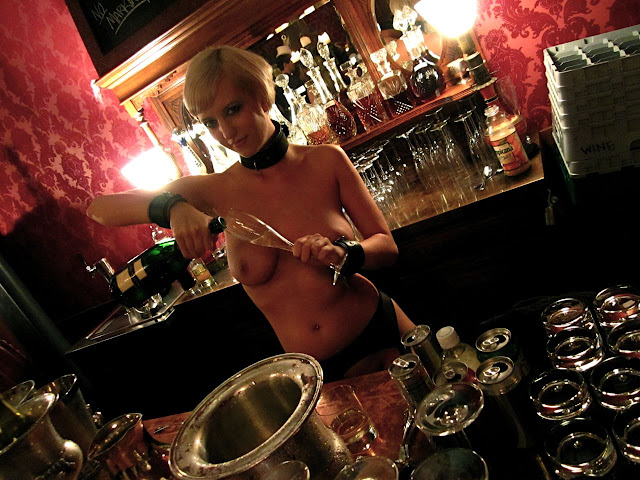 Sugar Sugar and the Niagara Escarpment 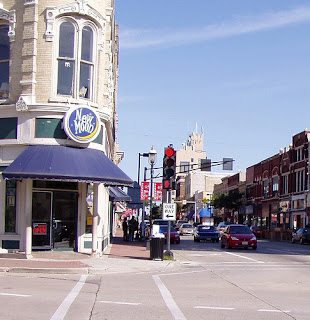 They have hidden the sugar jar at the New Moon coffee house.  Peggy was getting into it.  Not that they really minded, but at about fifty years old, Peggy is functioning at about a second grade level and tends to put way too much sugar in her coffee.  Not good for Peggy. Not that they really mind.  Peggy is pretty good at hanging out at the Moon, picking up toys, newspapers, wiping the tables.... and saying "Hello, my name is Peggy".  Aaron thinks she also has some other health issues that make ingesting vast amounts of sugar .... ah, not a good thing.  So, I need to ask for the sugar now when I get a coffee.

Anyways..... So I was sitting in Oblio's monday afternoon when, gosh almighty, in strolls Ed.  Hadn't seen him much since he retired, fell in love and moved to Canada.  Whoa... so there is a lotta catch-up talk.  He is back in town to try to sell his condo.... or figure out what to do with the over four thousand books he has stashed there.  Ed has a thing for books.  We're just chatting and catching up when he mentions that on tuesday he was going to do a day trip to Door County.... do I want to come along. 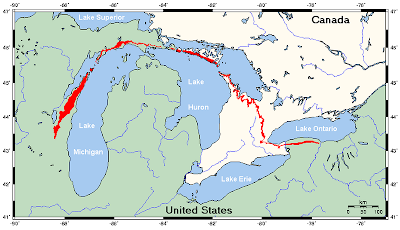 Door County is the long thin little peninsula in Eastern Wisconsin that separates Green Bay from Lake Michigan.  It's nice up there.  Lotta little villages sitting on little harbors.... Bailey's Harbor, Egg Harbor, Rowley's Bay, Sister Bay, Ellison Bay..... yadda, yadda....it's very pretty and a great place to buy Wisconsin Souvenir Mugs,,,,,,, genuinely made in China.  Lot of the travel mags call it the "Cape Cod" of the midwest.... which sounds a hokey as all get out, but probably better than being called other things, say, the Siberia of the Midwest (which is in Minnesota) or the Tehran of the Midwest(which is somewhere in North Dakota) or the Guantanamo Bay of the Midwest (another name for Chicago). Door County is also part of what they call the Niagara Escarpment, which is the America equivalent to a mix of the White Cliffs of Dover and some red beans and rice..... which makes no sense what so ever, but Ed told me all about it.....this Escarpment thing... (Hey, if you read that much stuff and you have a captive audience... why gosh, you have to talk about it).... I also learned that Ontario is the only Canadian Province that touches all the Great Lakes, except for Lake Michigan.  Bottled up knowledge is a terrible thing to waste.  So is bottled beer and boy and howdy I sure was glad we had a twelve pack of Sam Adam's Oktoberfest.  Helps the information digest.  We stopped at a couple of cemeteries on the way up there.  Ed's family goes way back to the 1860's and most of them are buried up on the peninsula.... and gosh, did I hear a lotta family history, too.  Kind of a genealogical escarpment rather than a geological one.  I also learned that when a Dane marries a Norwegian.... half the family will spell the name Christianson and the other half Christiansen... which accounts for all the mis-spellings on the graves, see.  So I was working on bottle two while I learned which Grandfather came from where and which was a logger, farmer or which uncle jumped into Sicily during WWII and which one accidentally shot himself during deer hunting season in 1958.

Another reason I went with him was to see my sister and her husband.  They were at his family's cottage in Ephraim cleaning up after a storm that hit the county last thursday. 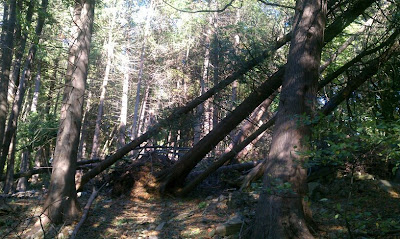 Well the storm left a bunch of down trees on the property, but thankfully none fell on the cottage.....which dates back to the 1880's or something, which My brother in law's grandfather bought back in the early 1920's or so... from somebody name Erickson... or Eriksen... which Ed and my brother-in-law discussed to no end.... see, the proper spelling, if you ancestors were English-Norwegian, or Danish-Norwegian.
And I was into my third beer by then.  So we then went to a bookstore up in Ellison's Bay that Ed knew about..... over TWENTY THOUSAND used books.  We had to stop.  Ed wanted to see if he had anything about the Niagara escarpment.  You really can never have to much information about escarpments, it seems.
Now, we hit Gills Rock... looked at the old ferry docks, and then headed south along the Lake Michigan shore.  Ed wanted to visit Cana Island, which is only about 8 acres, accessible by a small spit of land walk.... and still has the old 1869 lighthouse. 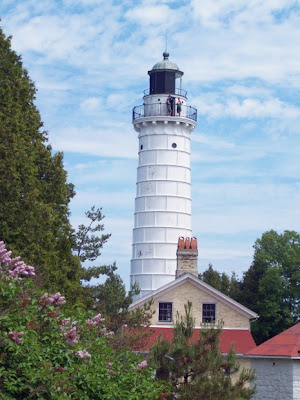 Ed gazed out on the water and started talking about what it must have been like, back then, to be way out on the lake and what a relief it must have been for the sailors to see the lighthouse, to know that they had rounded the last shoals and that the sailing would be pretty clear, then, most of the way down the lake.

And then.... he started talking about.... being 69 and retired, and in love with someone  fourteen years younger.... and moving to a foreign country... "Which is not all that foreign, " he said, " because they do watch football, see, and the language is mostly English," he laughed, "but I don't know anyone there! And I don't know where to get a haircut... where to buy a beer.... I don't know the land....the cities.... thank God we share the same escarpment!!!!"

And I realized why he wanted to come up here.  And I said nothing.
On the ride back south..... I realized why it is sometimes necessary to hide the sugar bowl from folks like Peggy...... and why we should always preserve our lighthouses for people like Ed.  There are rocks in them waters, see.
Posted by okjimm at 10:20 AM 8 comments:

Email ThisBlogThis!Share to TwitterShare to FacebookShare to Pinterest
Labels:whatever, ok!? a

oops the clip before this clip was the wrong clip...nevermind 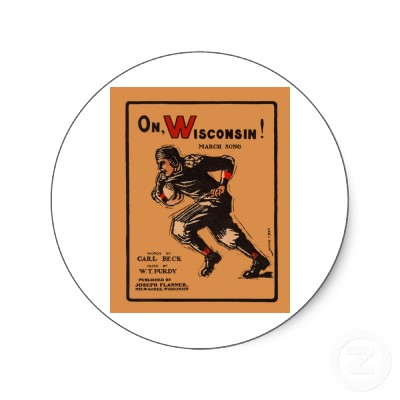 We Dont Need No Stinkin Badges!