There are days when I bounce Brillingly along Blog Blvd and I positively feel like a cop in a doughnut shop! It was about two years ago someone told me about blogs. I truly thought he was talking about where the grow cranberries. I know better now. Such interesting, creative, provocative, intelligent, funny, amusing, whimsical and NICE people.......I have been remiss in adding to the blog list of folks I read. I updated a bit on the blog roll. 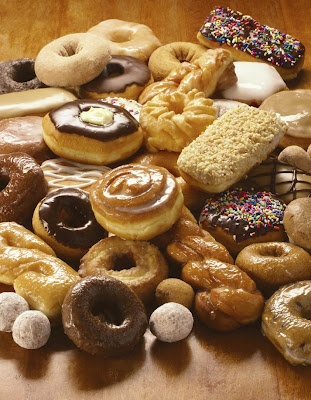 ...... it is almost enough to make me wanna buy a computer! (replace computer)

But then I realize it would take me away from places I want to go..... 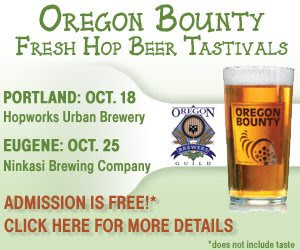 Help yourself to a doughnut!

OK. I am not the world's smartest guy. I admit it. In fact, I am rather proud of not being the worlds smartest guy. There are THREE of the World's Smartest Guys in the office and the are all assholes.

But! I am not the world's dumbest guy, either, and for that I am greatly relieved because we have SIX of them in the office and four of them are assholes. ( the other two are too dumb to be genuine assholes)

I am just an average JIMM.... NOT A JOE...... and I find it very demeaning when some asshole tries to equate my existence to a great lump of humanity with which he has no contact. John McCain cannot fathom the malaise I feel. His lame attempt to equate me as a 'Joe Plumber' is offensive to me. Not that I would ever disparage a plumber, but it is this generalization of Americans as average bumpkins, this lumping together of everyone as 'plain folk' that also insinuates, in my opinion, John McCain's disdain and aloofness for the comman citizens he now wants to bond with.

Well, FUCK HIM! I lost my house. He has seven. I can barely afford to keep my car running. He does not even know how many vehicles he owns. I am sick of the PALIN/McCain campaign and their condescending attitude! 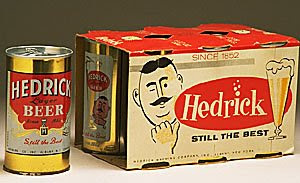 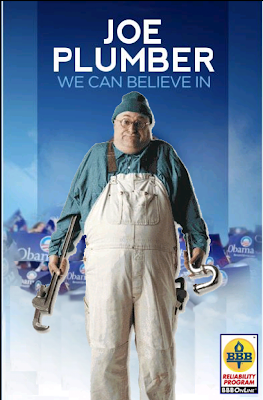 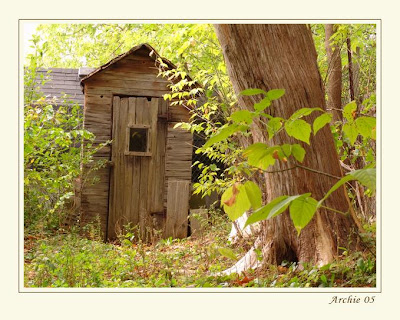 I do my own plumbing and am a very discriminating beer drinker! 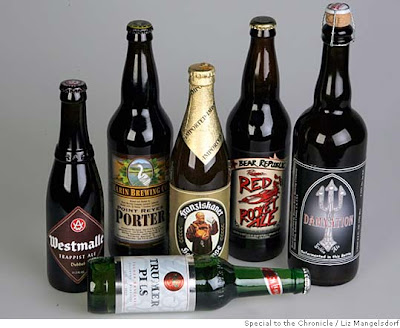 My name is jimm and I fucking AYE approve this beer (&message&stuff) !!!


*Wowsers..... Joe the Plumber is not licensed to be a PLUMBER!


AP
HOLLAND, Ohio - Joe the Plumber said Thursday he doesn't have a license and doesn't need one. Joe Wurzelbacher, better known as Joe the Plumber, the nickname Republican John McCain bestowed on him during Wednesday's presidential debate, said he works for a small plumbing company that does residential work. Because he works for someone else, he doesn't need a license, he said.

I wonder if he is registered to vote?
Posted by okjimm at 9:14 AM 9 comments: 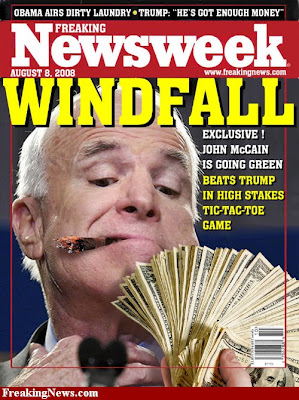 John McCainSept. 15, 2008
"There's been tremendous turmoil in our financial markets and Wall Street and ... people are frightened by these events. Our economy, I think, still the fundamentals of our economy are strong. But these are very, very difficult times. And I promise you, we will never put America in this position again. We will clean up Wall Street. We will reform government." —

McCain, speaking at a rally in Jacksonville, Florida the day Wall Street giants Lehman Brothers declared bankruptcy and Merrill Lynch was taken over

—McCain, responding to a question during an interview with an NBC affiliate in Cleveland, Ohio, on whether he'd vote for the version of the bailout bill Treasury Secretary Henry Paulson first presented to Congress. Paulson had given Congress his three-page plan four days earlier. 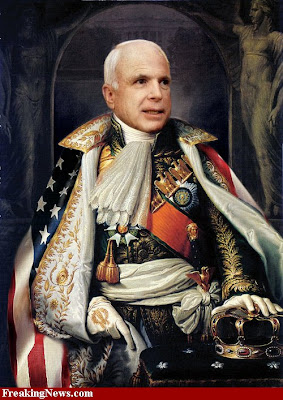 Thank God for good beer...... it takes the pain out of Palin-ful choices 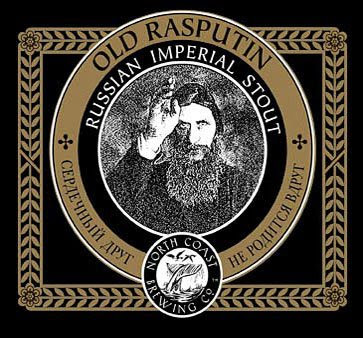 WASHINGTON - The Republican National Committee is halting presidential ads in Wisconsin and Maine, turning much of its attention to usually Republican states where GOP nominee John McCain shows signs of faltering. ...........A poll in Wisconsin by Quinnipiac University of New York for The Wall Street Journal and the Web site of The Washington Post, taken after last week's presidential debate, had Obama at 54 percent and McCain at 37 percent.

Now maybe I can watch my favorite reality TV show,

NEWS! FROM THE BAR! 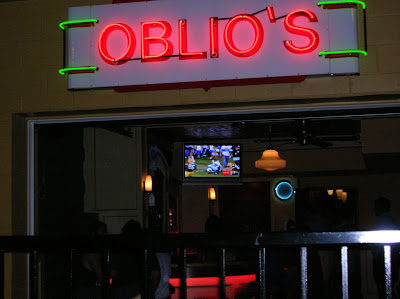 Our city's esteemed City Editor, Karl, prefers the Hacker Pschor Octoberfest, but is unsure if putting the Iraqi War casualty list on the front page is a good idea. It may upset some of the Senior Citizens.

Billy Lang from Air Affair Photo http://www.airaffairphoto.com/ says that sales at the last couple of art shows have been good and he may think of buying me a beer in the near future.
Sarah Dae reports that Tony the Bum was seen lurking downtown again. Noted.
The Grand Opening celebration for the Ohio St. Bridge was a big success; the bridge itself is set to open in two, three or four weeks. Maybe.
Oblio's is out of Left Hand Brewing's Milk Stout. Schultzie says, "Too bad, Buddy." 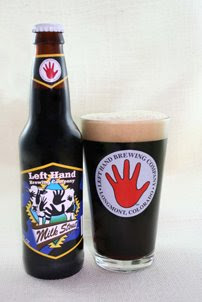 In other breaking news, I will complete the meme-thingee that Randal slapped me with!

1. Clothes Shop: C'mon! I am a shopper of opportunity! I shop-lift everything I own, which explains some of my color combinations.
2. Furniture Shop: Kinda hard to stick a chair under one's coat.... I usually pick up what I need on the curb or at St Vinny's Thrift shop.
3. Sweet: Cheap, satisfying, and easy to steal and sneak into the movie theatre! Kathy was sweet, too, but we broke up some time back. She wasn't cheap and it was always really hard to sneak her into theatres. 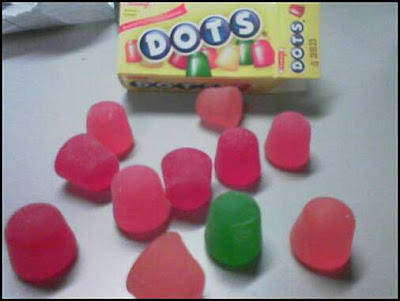 4. City: OZ. Best place to score courage, have a heart and get a cheap diploma. My Kinda Town!!
5. Drink: fermented? Most anything brewed all-malt..... no funky rice or corn filler. Non-fermented? gees, there is such a thing? Wowsers!
6. Music: skip the rap, hip-hop, corn-ball country and everything else is ok. (except Doris Day songs)
7. TV Series: Green Bay Packers. Sixteen weeks of green&gold! Gooooooooo Bratwurst!!!!!!
8. Film: Scotch Tape.
9. Workout: Biking and the 16oz right handed arm- curl at the bar.
10: Pastries: Love me a Doughnut! Plain. A simple fry-cake doughnut is a many splendored thing. Two of them are gorgeous. Three of them is a orgy!
11. Coffee: Free. I love free coffee, so if you are going, bring me back one, too. Little cream, some sugar. Non-Starbucks, please!
Posted by okjimm at 9:26 AM 6 comments: 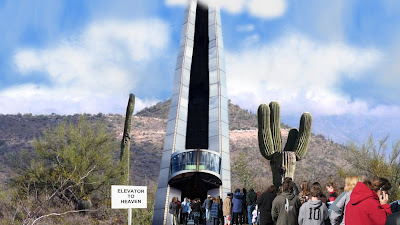 Wowsers..... it has been warm in Wisxonxin. Been biking and beering. Love, ya'll.
Posted by okjimm at 3:28 PM 7 comments: