ok, that ain't no never mind and ain't so hard to figure out if you are really really willing to try, but I is here and you aren't so I will get into it a bit... just in case there is a small insignivicantal bit of maybee confusingification which would not do and would not float in a bathtub, see.

See, the sky can be a neat shade of blue, kinda like babies eyes when they smile... and that is stuff.  Then there are the clouds, white as all get out, that float through making neat shapes...and that is such....and when you look away for a second the cloud patterns have changed, as if a new artist had taken over the painting, and it seems so fresh and clean that it reminds you of when you were young and a sweet girl said she loved you and you embraced the words fully.  That is STUFF&SUCH.
Did that make any sense?
Gees, maybe not.

There is a morning when you are seven or eight or six and your Mother takes you out in the June morning to pick strawberries at the pick-your-own farm. The heat has not risen yet from the East as you look down those long rows of berries.  That is stuff.  As soon as you are out of sight from your Mom... you start eating.  Nice big juicy strawberries.  Your hands turn red...your face is red, your nearly new white Hanes T-shirt is stained with all that deliciousness.  Stuff.  Later, when you get yelled at for not picking enough and for ruining a good shirt... you just grin and take it cause you know your older brother and sister picked enough to take home and you will still get some with home-made shortcake. That is Stuff&Such.
Or maybe I am just feeling too much.... instead of thinking....Or..maybe not.
Posted by okjimm at 9:52 AM 7 comments:

was thinking of going fishing..... 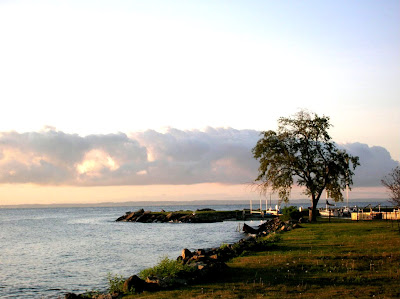