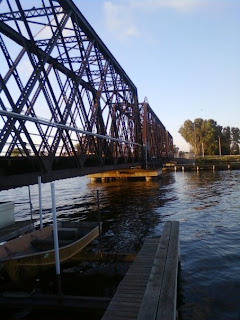 well, they did build that sucker back in 1899 so maybe it is time to replace it, but I will miss it.
The photo is one I took a few years ago from a favorite spot on the North bank where I would go and read on Sunday mornings.  The bridge is the last one for boaters before the lake.  It is an old swing-gate that would take quite a bit of time to open, making the boats rather stack up on the river.  I haven't been down to see the new bridge construction.  I guess it will be a draw bridge and be able to open quicker.
Oh, Well.....

I used to wonder what was in the railroad cars.... lumber, chemicals,  manufactured goods... but then it was no never mind and I knew that there was no knowing what was in those cars.  So I didn't think about it anymore.

I did hear that the R Rep from Missouri,  Todd Akin, says that women cannot get pregnant from "legitimate rape" which makes me think he is sponsoring a bill so that you can get a 'Rape Permit"... kinda like, ya know, a concealed gun permit.  Boy oh, boy..... I guess he never stopped to think of what is in those train cars.


I really don;t know where the train is going.  If it is going south, I would guess Fond du Lac or Milwaukee or on to Chicago.  North....well, Green Bay and after that there is only the Upper Peninsula unless it jogs west and heads to Duluth.  Probably once the train hauled a lot of people who would peak out the windows as the train traveled along the lake shore and through the city, but there are no folks on that train anymore.... just boxs, some empty, some full. 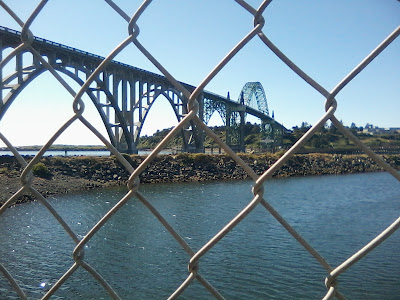 I guess it's really not about the train, though, but the bridges.  See, you want to get from here to there and maybe it is a river or a lake or a valley and you really need a bridge.  Sometimes you just want to move your heart and soul to a different place and going around the long way just won't cut it.  Sometimes there are fences in the way.... and you just can't get there from here... or from here to there.

Anyways.... Todd Akin also said "Anybody who knows something about the history of the human race knows that there is no civilization which has condoned homosexual marriage widely and openly that has long survived."  So what is very apparent is that someone running for the Senate of the United States engages his mouth before thinking.  If he thinks at all.  What is more distressing is the the individual who is running for vice President of the United States espouses essentially the the same views.  He opposes all abortion, for any reasons.  Has voted consistently to deny Gay citizens basic rights everyone else has.  He also sees Medicare and other social programs designed to aid our senior citizens as basically.... a waste of money.  Now Ryan flips faster than a two dollar pancake at a road side cafe but he has consistently voiced views parallel to Akin's; quoted in the Washington Post, speaking of Akin....
“a great asset” on Ryan’s budget committee and an example of “exactly the kind of leadership America needs.”   ....... yessirre Bob ..... with an asset like that.... who needs foot fungus?