Getting caught up with Larry and Trumping at the Snoring Dog 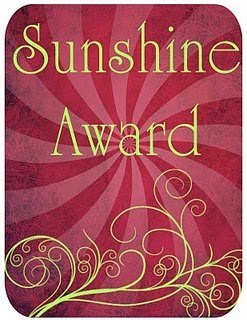 Ok.... just getting caught up.  Things have been weird lately... and busy.  The Boy was here for a wedding....and it made for a crazy, fun weekend, the daughter is fighting City Hall on Bogus Parking tickets.  I fought off a bit of flu.... and the political mess just keeps getting messier.  I did think of voting early and then just ignoring all the ads and fuss... but that would kind of like ignoring Thanksgiving by having a huge Turkey dinner in October.   Would rather take the fun out of it.... and besides.... I truly do like going to a polling place in November.

Well, anyways.... see, what went down is good old Larry from WOODGATE'S VIEW
gave me this spiffy keen Sunshine award.... kind like one of those, gosh, I certainly like to stop at your blog thingees that used to go around .  they seem to have fallen out of fashion  which is too bad.  They told you a bit more about the writer you are reading... a little bit of aknowledgement... plus a good heads up for others to find some nice blogs.   OK...I am supposed to mention a few things about me... and then pass the award along as well as mention other blogs that are good... in my view.  So here are a few answered questions.....

Favorite Color: angst.  Angst fits in with absolutely everything in your wardrobe.  Plus it is usually permanent press.  I am also fond of melancholy.  It fits my wardrobe well, too.

Favorite Animal: three toed Sloth.  Any animal named after my favorite sin has gotta be good.  Plus three toes only makes it easy to clip one's nails.  Billa Lang is also a favorite animal, though I will never clip his toenails.

Favorite Number: 14.... cause thirteen is unlucky and fifteen would require me to take of at least one shoe and sock.  Makes sense, right.

Favorite Drink: hmmm...right now?  Beer.  Currently the Ranger IPA from New Belgium.  But that could change with eht next glass.

Passion: well, it used to be Nancy, then it was Kathy, then Suzanne, then another Kathy....then I lost track....it was all so long ago.  Beer is better.  Beer never divorces you and doesn't get upset if you don't rinse the glass well.

Giving or Receiving Gifts:  well.... I give as good as I get... it just depends on how much money I have, and as lately that is very little.... I am lining up on the receiving side

Favorite Day:   the one that is scrunched in there between sunday and monday  Or is it the one between saturday and sunday.  gees, that is a tough one. Of course, I am also fond of the day after Never.... which is when I pay bills.

Favorite Food: Free.  You just can't beat free food.  But Cajun Meatloaf is right on up there....with roux gravy and pecan rice.  Red beans &rice with smoked pork chops is pretty darn nice, too....oh oh oh.....and chicken Cordon Bleu and a side salad... and... well, beer is good food, too. oh oh oh... and food for thought is decent, specially with some Dijon and an apple salad.

... so that is that.  Late, as usual, but very informing I am sure.  Soon I will find a place to stick that award on my blog, but in the mean time truck on over to Larry's place; it is a nice place to be.

Now.... I was supposed to pass this award on to other's... but it seems, as it were, that most everyone I would give it to, has already received it ....... so...just scroll down my blog list and you are bond to find someone you will like.

Now... see,  in the spirit of all that... I must mention Jean at SNORING DOG STUDIO

... cause there is a nifty little thread going on there about the Donald 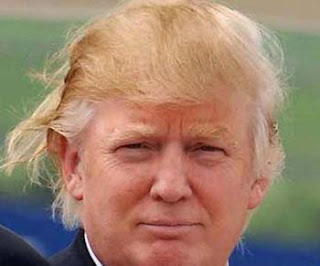 Jean rather thinks.... and gees, she is rightie right as rain, that 'Trump' could very well be

As well as a nut case millionair-head.... well gosh.... I gotz inspired.... and added to the thread