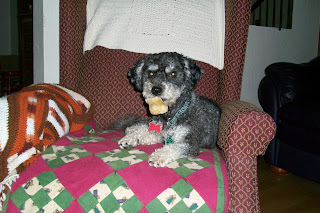 Ok.  A picture of the 'new' dog.... who is at least a year and a half old.  And it is really not my dog... in the classic sense. I never owned the last one, either, to be honest.  'Mommy' bought that one for the kids as a 'separation'-guilt present... "see, what a nice white fluffy dog Momma got you."  But that ain't no never mind, see, cause it was a really great dog... and for a few years it was at my house more that hers, but that is no never mind, too.  The real deal is that I trained the first one, and now I am training this one, Oliver. (please sir, can I have some more!) Now, I am not like that guy on TV.... whatz his name?>>> Ceasear Romero, Sid Cesaear, Ceasar Salad..... ya know, that guy.  First off, I am not Hispanic... second off.... I really don't know how to train dogs....  but I did a great job with the first one.... I could take it for walks without a leash ( which the ex could never do)   I just used a lotta common sense.... kept it simple.... and gave it a little beer at bed time.  It really became a shared dog... whether I liked it or not.  And all in all, I did. So, with the old dog gone.... rest in peace and stuff.... and Wonder Girl moving out of Mom's.... the Ex decides she would like..... get this... another dog.  Oliver.  She got him from the shelter.  I guess the previous owner did not take care of it and it ran loose too many times.  It's some kind of schnauzer-poodle-something-something mix.... with a lot of energy.  More than the Ex can handle... and the next thing you know.... I am training a dog.... again. Now, the first thing I noticed about Oliver is that he has a GREAT vertical leap.... kinda like Tigger in the cartoons... but virtually no horizontal propulsion.  Getting up into a chair is a challenge,  but it can leap four feet straight up into the air, land on the counter, make itself a baloney sandwich, drink my coffee and then carry the loaf of bread off into the living room and bury it in the sofa.  Took me a long time to find that bread.  Oliver will eat anything and I figured it was just stashing for later.
Posted by okjimm at 11:21 AM 11 comments:


Ha! My former State Senator, Randy Hopper, age 45, was pulled over and arrested yesterday for OWI. Blood Alcohol levels were not released.

Randy was one of Scott Walker's henchmen.  He was  recalled in a special election in August.  Good old Randy had been under special scrutiny for leaving his wife and shacking up with a 25 year old chick-a-roo, who is suspected of getting a great State job....for allegedly giving good blow jobs.  Randy is a millionaire who also drew some attention for supposedly living out of the district he represented.