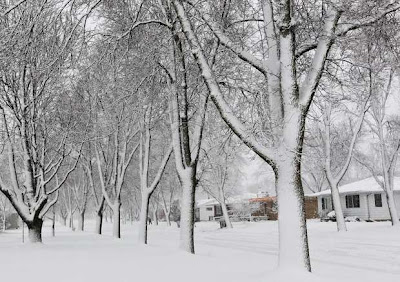 Ok....every year getting through the Holidays seems to get harder and harder.  Course, if there wasn't so much ice I wouldn't fall so much, and as they say, the older you are they harder you fall.  Ouchers and stuff.  Well, see, the Friday before Christmas we got a huge type blizzard.....ended up with about a foot and a half of snow.  Pretty darn windy, too, but it wasn't too bad if the Ex wasn't talking.....then the wind was moderate.   Then, the friday past we got another seven inches of snow.  This winter is overdosing on Viagra iffen you ask me.  We didn't get this much snow all of last winter and we still have three months left to go.  But we are a hardy breed in the Great White North and  most are optimmistic....but I guess that depends on whether you are one of those that thinks of your driveway being half full or half empty.  I love the irony of going out in the cold and snow, busting my hump shoveling this crap.... and then having to come inside and ice up my back.  But winter is here to stay...even the most hardy of folk have finally put away their BBQ grills and patio furniture.  Course.... now that we have all this snow...they are saying the temps are gonna fall below zero.  I'm gonna fall under a extra blanket....iffen I doan fall and kill myself on the ice, is what, see!

Boy Wonder made it back from LA before the weather turned nasty.  After a cursory amount of time with his parental units....(most time being spent at Peabody's seeing who else made it home) he packed up his snow shoes and heading to the Lower Eastern part of the Upper Peninsula of Michigan.....which is only slightly less boring than the Upper Western Part of the Upper Peninsula only causee it takes less time to get there, see.
So I guess I have it correct...Max, Mark, Chris, Matt, Jess,Jim and a half barrel of beer, snowshoes, lentil soup, chili, beer cheese soup.  Ah, the young and there liquids!  I am sure Jim remembered the tequila as he is always been very concerned with having a balanced diet.  Maybe thirty years back I ould have been interested in that kind of trip....in fact I guess I did do a couple of trips like that, but now....if I can't use my bicycle...forget about it. 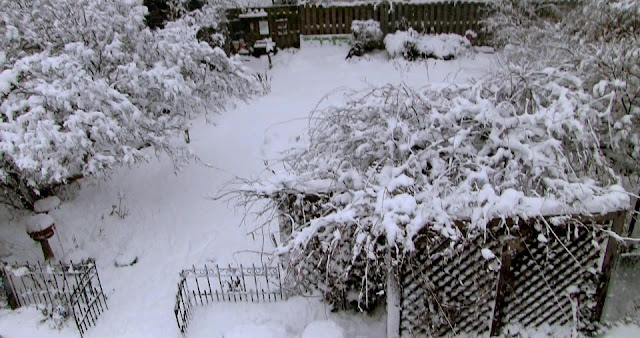 The Princess screwed up her car.  The transmission.  Could be a gonna.  The only saving grace is that it is a vintage Volvo...we got almost five years out of it with the two kids and the parts dealer will give almost as much as we have paid in repairs over the ownership....so it's not so bad.  She is acting like there is no other car in the World, though, and has not been happy.  I am less than happy....I will be crawling up under that sucker in a few days and seeing if it is just the linkage.  Lucky me.  But I am blessed in having a daughter that thinks a good time does not entail a trip to the UP to get drunk with her friends.  They plan on doing that in the comfort of her apartment for a New Years celebration.

Ah, yes, New Years.  Whoopee.  I like to clebrate in a sensible way.  Gonna met Baseball Ed for a couple of beers.  Found him some old Detective Magazines from the 1960's.  Didn't pay much and it will keep him out of trouble for hours.  Billa Lang may stop by.  He spent four days with his girlfriend up in the UP skiing(ya, like what's up with theat UP shit anyways....and frankly. a man his age should take up something more sensible, like knitting or crochet, or Dominoes. Billa suffers from arrested develpment...but he can never remember what age he was arrested at, though I think it was once in '74 and maybe another time......who knows.  I cannot make that shit up, really.  I am not sure who else will show up on New Years early afternoon....Joe Cool has to work, Nick was there for the Packer game yesterday and probably will not show.  Maybe some other folks....but me...There is a pork roast in the crock post, some aged Brick Cheese....and I have some DVD's to watch...gonna do a Jack Benny Retrospective.  I always liked Jack.  A man that stops aging at 39 is a smart man.

oh well.....hope everyone had a good Christmas......and to all A Bloggy New Year.