Sahara Palin can see Lake Michigan from her porch!!


She can see Wisconsin from her porch!!
SARAH PALIN  has weighed in on the Wisconsin political scene..... which I find astounding for a politician who quit her office.... in the middle of one term.  I find this particularly abhorrent..... she claims that " Union bosses " are using Union workers for their own ends.  Get a fucking clue, Sahara!
for more info, and comments check out ABC NEWS.  The comments are very telling.  Yesterday a more conservative friend made a comment about Jesse Jackson's appearance in Madison to support the protesters.  He said "there is no need for outside agitators".  Gees. Sahara's personal wealth is now estimated to be about $12MM.  I wish I could quit my job and make that kind of money.  I do not think that someone who has not worked for the last two years should say anything about workers.

There is expected to be over 100,000 at the Capital today.  The real telling thing???? No violence, no threats no arrests.  News was that there were NINE citations issued for minor violations.  In a crownd of over 45,000 yesterday.  There are more arrests at a Packer-Bear game!  As Mack72 commented at the ABC news link...
"I'm a member of a union here. I have not heard the term "union boss" in years. Sarah you need to get better writers or at least read what they write for you before it's published. This is a rights issue. We should all be watching. I agree the media is spinning this. They attempt to portray there is violence here and there is not. People singing, kids, and many of us fear or the governor's assault of the middle class. No guns, profanity, or threats of harm like when the tea party runs a rally."

in other news.... I will have a pale ale at Oblio's this afternoon.  I could not find a ride to Madison.
Posted by okjimm at 10:32 AM 3 comments:

Russ!!!  Too busy reading to write!!!  the late afternoon Social Club at Oblio's should be especially interesting...it is when a lot of the U professors & staff show up....as well as some from the Newspaper.

*foot note.... at the Rally on campus yesterday I asked the sole University cop I saw if there had been any trouble.  She just smiled and said,  " I'm only here to make sure no on litters. there are a lot of signs."  I asked her if she was a Union Member.  She just smiled.
Posted by okjimm at 10:45 AM 6 comments: 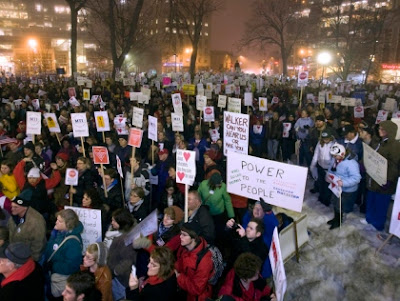 Yesterday 14 Democratic State  Senators left the state to prevent a vote on a budget the newly elected governor is trying to pass without debate.  He is asking the middle class to sacrifice while simultaneously giving tax breaks to the wealthy.  He is threatening to fire or lay-off state employees, while touting tax breaks to corporations to help them 'create ' jobs. He passes bills  beneficial to special interests that run up the state debt by 145 million dollars and the cries "Crisis"


from the Oshkosh Northwestern:

Truth be told, the bill is the beginning of an effort to roll back the right of workers. Its lesser-known provisions set a dangerous precedent for granting the executive branch broad emergency powers where an emergency does not exist. The speed in which the bill is heading from proposal to adoption is also of concern. It is slated for a vote Thursday, just six days after it was released to the public. The fact that a national special interest group, The Club for Growth, began broadcasting ads in support of the proposal at the same time the bill was released shows that this is not a homegrown effort to fix Wisconsin's problems, but an orchestrated, ideologically driven campaign.


last night I stood with a group of about 200 on the Opera House square, one of the busiest intersections in town.  Protesters all. Quite a few held signs that urged motorists to honk in support. The hoinking was consistent and loud. I could hear it as I walked home.  Freedom has a sound....you know it when you hear it. 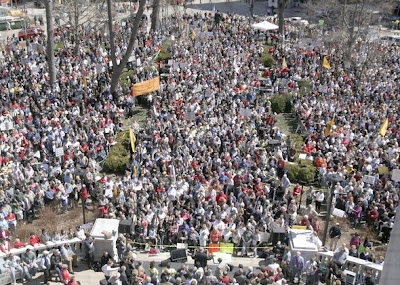 
MADISON, Wis. – A Wisconsin state senator says the 14 Democratic lawmakers who are boycotting a vote on a controversial anti-union bill have left the state.
Sen. Jon Erpenbach says the group wants to force negotiations over the Republican-backed bill, which would strip most public employees of their collective-bargaining rights.
Erpenbach told The Associated Press that he and his colleagues had left Wisconsin, but he would not say where.
He said the plan is to slow down the bill because it's "tearing the state apart."
Senate Republicans can't vote on the bill unless at least one Democrat is present. Police could be dispatched to retrieve them, but it was unclear if they would have the authority to cross state lines.

With all the Democratic Senators gone... the Statehouse Senate does not have a quorum to vote on the proposed budget!!!

The first rally today, announced at approximately 5 pm yesterday drew about 150 to the court house steps in Beautiful Downtown Oshkosh.  The second rally, at UW-Oshkosh, drew about two thousand, predominately students, but containing a good mix of State and City employees as well as University workers.  Teachers at UW-O are not Unionized.  At both rallies members of Local Firefighters and Police Unions, not affected by the Governor's proposal, attended to lend support to affected Unions.

**Just a footnote.... I attended the first rally with my ex-wife, a teacher of highly at risk special students.  She is a minor Union Official.  She declined to attend the second rally because of , "... issues with some of the students. They need me."  Several of them are at the 'fine line' between being in school or being in jail.  Most are from damaged families and many are on probation.  Divorce can be a many splendored thing..... but I am proud of her, her dedication, and her willingness to balance her own self interest with the needs of others.

.... a new revolution may have started in the USA.... and it's not the Tea Party.... this one has intelligent people!

Spread the word!!  next rally tonight, 5 at the Opera House Square!
Posted by okjimm at 2:39 PM 5 comments:

Coming soon to a state near you.... or the State of U


I have not been this pissed off since Nixon and the tet offense..... truly..... and what is worse is every fucking conservative asshole thinks he can now get in my face......
well it may  be an older face, an it may not be as pretty as it (maybe) once was... and I am a lovey-dovey goddam liberal, but goddam it..... 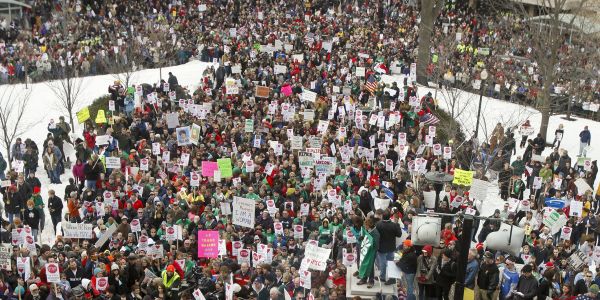 There are two rallies tomorrow. I may have to give up beer and bloggy.   And get my bail money in order.

and if I don't protest..... will my children still respect me?

Check out the Chief

Balancing The Budget.... Oh, and how is your day going??

Moab Diechleer and the Book of Chance 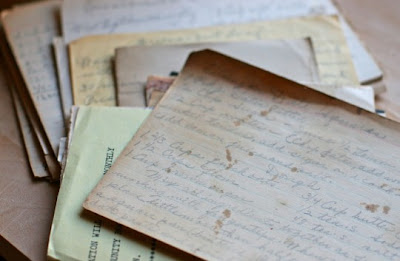 I am really not sure where this will go, what to think of it, how I should talk about it or who Moab Diechleer is.
But I'll give it a shot.
See, when my mother died she had left boxes and boxes of stuff in her closets. The hall closets, the bedroom closets, the basement closet. Some were full of dress patterns and fabric scraps; she was a great seamstress back in her prime and a great saver... well past her prime.  Other boxes were full of old photographs, postcards, news-clippings and recipes.  A tremendous amount of those..  Some of the recipes were on note cards, some hand written on scraps of paper and even napkins.  Still more were clipped from Newspapers.  Those I can date and there are some from the 40's and 50's.  Most though were from the late 70's and into the 80's. There were enough that I decided I would take the boxes home and sort at my leisure because there was enough evidence that she had sorted and resorted these boxes through the years and that any single box could span years.  One box could contain my brother's second grade report card, a church bulletin from 1968, a photo of her parents from 1948, a recipe from 1958, or a clipping about my father from 1978.  Crazy eights I tell you.
At first I started just throwing the recipes away and keeping the good stuff, the family stuff.  I truly was working with 12 or fourteen of these things and it was a big clutter. But then I looked at a couple of the recipes and thought they might be worth trying.  See, my mother was not a great cook by any stretch of the imagination.  Oh, see had a handful of items she made that were excellent, but all in all, nope... boiling water and adding salt... she did that ok, but there was a big fall off after that.
So I got a little more careful in my scrutiny.  Then in the middle of one box  I found a yellowed piece of paper, almost brittle to the touch, on which was typed..
"When frosting a cake make sure the cake is made first"
-Moab Diechleer
Now I got a chuckle out of that and set that piece aside and continued sorting. Soon I came upon another old looking scrap and on this  was typed..
"Never buy a chicken from a politician... you never know what crap
that bird has eaten."
-Moab Diechleer
Seriously now I am very intrigued.   Who is Moab Diechleer?  I could not find any reference to him on google and it is not a name that ever came up in any family discussion.  Was he an old family friend?
By this time I stopped and went and got some beer.  This is getting interesting.  In the bottom of another box was a recipe, handwritten, for turkey and walnut casserole. signed,,,,,,, Moab Diechleer.  It really looks like an awful recipe.  I'll never try it.  But I put that aside.  Soon there was another scrape of typed paper.
"When in doubt, stop thinking."
-Moab Diechleer
Now Mom was never much of a philosophical thinker, she rather relied on the Vatican to do that for her, and most everyday living thoughts she garnered from Ann Landers so I am working on a mystery now.  I have all of the boxes emptied.,,,, spread all across the bed, the couch, chairs, floor.  I am looking for more Moab.  Wrapped in old cellophane I uncovered pages, all Diechleer-isms and recipes that Mom had sewn together as a book.  'Goldmine'!!!!  and then.... the mother lode... an old ledger that she had pasted recipes and clippings and a lot more Moab!!!!
I will relate more of this later, as I get it sorted out.  I still do not know what to think of this......but as Moab says.,,,
"If at long last you have to go looking for Truth and Wisdom....
you must have been  pretty stupid in the first place."
-Moab Diechleer
Posted by okjimm at 12:30 PM 3 comments:

Valentine's Day-----Have you hugged your kids yet.... or at least bought them a beer?

aint got nutting but a song