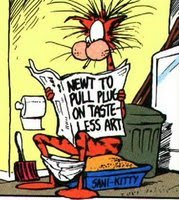 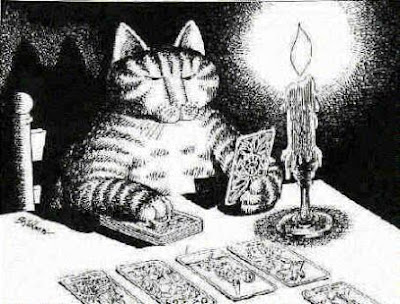 Ya, Know... I have noticed that more than a few blogger-ites love cats. 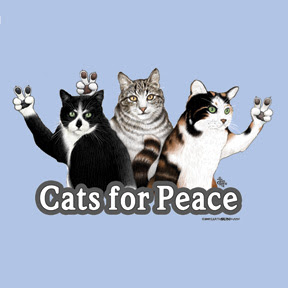 nice cats
ok cats
weird cats
wild cats
smart cats
dumb cats
sassy cats
polite cats.
Frankly, some days I think the blog world is overrun by cats.
Not that there is anything wrong with that, but doesn't anyone have dogs? Or hamsters? Fish?
Parakeets? Hermit Crabs or mice? Lizards or snakes? What is with all the cats?
Frankly, I like to raise worms. They are very quiet, I never have to walk them........ AND
they are good protein in a pinch. I had a pet Emu egg, once.... but the realtionship got rotten. 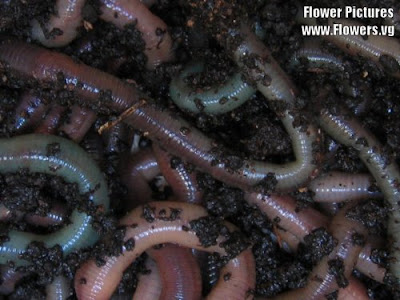 I'm all about the dogs. I even wrote a post today about my big special needs dog, Cyrus. And I posted a lovely picture of my depressed but regal dog.

Don't get me wrong, I love the Pussies For Peace.

I have my cat Tabitha, she's a Blue Russian. And I have Binky, a black kitty too. Cats picked up on the verge on death include Twiggy, a tortoise colored cat and Elsie (LC=library cat) who is a blue Siamese. She showed up at the library one freezing winter night and I couldn't just ignore her. She was bleeding out the back end, had an infected ear and was just a cat skeleton. She is very hair brained--she panics easily and needs special food which costs $30 a bag. But leave a poor dying creature out in the cold to die--NEVER. Then there is Pickles who is an orange and white tabby, another half dead stray Hubby picked up. Trill, who is a gray and white tabby found in a hopper at work at 4 weeks old-no mother kitty to be found. Finally there is a tortoise and white kitty named Patches. She is fat and lazy but the youngest of them all. She was found by the highway abandoned. Hubby has just brought home another orange and white male tabby from his work who is living out in the garage for now.
But we do have three dogs and two turtles too so it ain't all cats around here.

Utah... I am not much of a pet person. I had a parakeet, Gomez, for 11 years. Old Bird. He was the old pet I ever had. He drank tequila and smoked dope. I like other peoples dogs and cats... but none of them will drink tequila with me. :)

Libs! You really break me up! I am allegric to cats... make my eyes bleed. Bubba and the Boys adopted a cat for the apartment...Thanis. Cool cat, but I always have to wash my face after playing with it or I am in big trouble for hours.

I really did raise worms for awhile. They really liked coffee grounds and stale bread soaked in stale beer. My kind of pet. I would round up a bunch and let them go in the garden. A worm stampede is a thing of wonder... especially when all other forms of entertainment are exhausted. (and after a few beers for the worm rancher)

I feel so much better coming after Liberality. Phew! We have four indoor cats and one outdoor cat.

And they're the Pussies for Peace, not the Cats for Peace.

I think I would prefer not to have pets, honestly. They are a lot of work--like having kids. Maybe when I'm old and alone I will change my mind about this and get a pet for company.

All of my pets were supposed to belong to my kids. But of course I'm the only one who ever remembers to take care of them. So everyone's totally ga-ga about me--well, the dog and the cat. I can't tell much with the lizard, although he turns green when he sees me. She?

Liberality, you ARE the cat woman.

worms are ok by me. hell I hardly even kill a spider anymore--just ask hubby to remove it to out-of-doors, where it really belongs.

I can barely keep a houseplant going, let alone a cat. My blog is a cat-free zone, come to think of it.

Any pet that doesn't make noise is alright with me.

well, i guess it comes as no surprise that i personally am a SERIOUS cat person. not quite a "catwoman" yet ... i've limited myself to two this time. but every once in awhile someone brings my attention to some poor abandoned kitten or cat and i really have to force myself to "just say no."

SEE! I knew all you folks were Cat People! AHA...
... I knew I would be the only one who had raised worms!

Anita... ya know, you could just be a cat-action-person-woman!

Randal..... they made pet rocks with you in mind. Heavy metal pet rocks.

Sorry I'm a little late to this party Jim, but I have a soft spot for canines. I can appreciate the love people have for cats because they're self-cleaning and self-sufficient beings for the most part. But there's nothing like being outdoors with your favorite mutt and other people's mutts while taking in a warm Spring day.