I am just minding my own beer...and all these

I was trying to think of what to write and I drew a blank. Not that it is unusual for me to draw a blank, in fact, drawing blanks is my most acute artistic statements. Miriam suggested that I attempt to write a bit about when they shot some of the Johnny Depp movie, "Public Enemy", in Oshkosh last spring. Gees, I don't know why I didn't think of that.

It was early last April when Hollywood came to town. The film details the infamous bank robber, John Dillinger, played by Johnny Depp, and directed by Michael Mann. We are an old mid-west town with many of the downtown store front very much unchanged from the 1920's. There various scenes shot around town, a bit out in the country and then some in Milwaukee, Madison and at the actual scene of a shoot out at a resort further to the north. 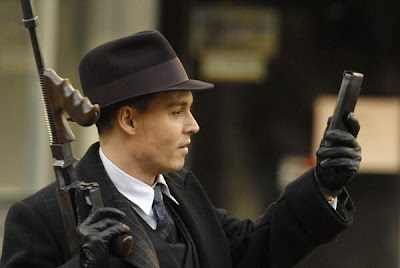 Johnny Depp as Dillinger
Most of the scene shooting in town took place about a block from my apartment with some of the cast and crew trailers parked about half a block away and right behind my favorite bar stool atOblio's. I got to know a few of the scenic designers rather well as they were in town a few weeks before the filming started and had found Oblio's to be a nice spot for a beer. There was also a significant amout of activity around the coffe house where I go for weekend morning brews. It is conveniently located across the street from one of the old banks Mr. Depp gets to rob. 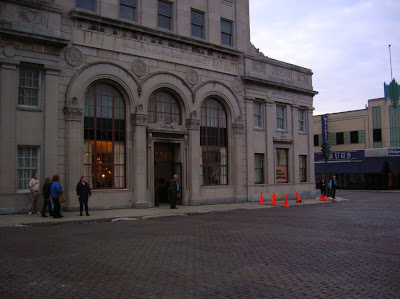 Bank with fake cobblestone
For two weeks prior to the actors showing up there were stage hands, electricians, painters, carpenters and folks of all ilks running around tow 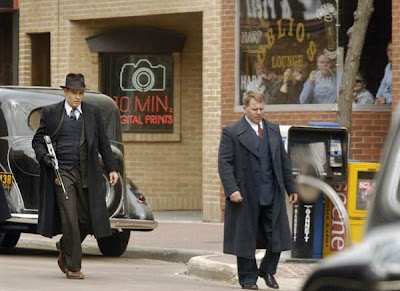 The bar was swarming with gawky tourists, extras and folks who had leased antique cars to the film studio. Now I had to navigate the film area daily and all in all it was kinda fun. I don't know how many times I was stopped by rent-a-cops until I started wearing my work badge on a lanyard and carrying a leather back pack so that I looked a bit like some of the production people. 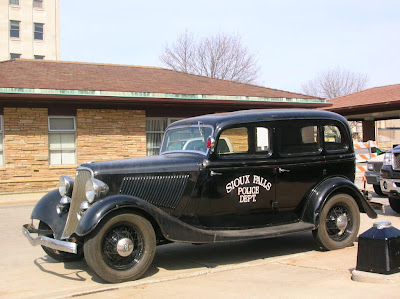 The tourists in town were the worst. Made it real difficult to get a beer or a cup of coffee. Some were so eager to meet a "movie star" that they would erroneously assume everyone they didn't know was connected with the filming. I had one old lady ask me if I was Steven Spielberg ( the glasses, nose and beard MAY be somewhat similar, but that's it.

Oh gosh, I'm in a dither....JOHNNY DEPP for freaking sakes! Oh lord, I may faint, I LOVE Johnny DEPP, oh, my husband is laughing...Did I say I love JOHNNY DEPP? You lucky so and so.

i am old enough to have been a big '21 Jump Street" fan. i was never one for celebrity posters and all that stuff, even as a kid.

I don't think the folks around here liked that film because it brought back bad memories for Mooresville. :(

Were I Miriam, my hand would still be unwashed.

Libs.... The movie comes out next summer....I am sure that Mooresville will not be too pleased....not exactly a favorite son, huh!

I'm glad my wife didn't know about this as she'd no doubt have been on the way to your sordid little burg, along with the rest of the previous female droolers.

You should have played up the Spielberg thing. Rich and famous people always get drinks paid for by the guy making a pittance!

Randal.... I DID play up the Spielberg thing.... more later!

Very cool story. However, I'm with you on the tourist thing. They're like cockroaches in New York City; they're everywhere and unavoidable. The worst part is when they come on our commuter trains to go to JFK International. Typically, they're lugging gigantic backpacks filled with the entire contents of their living quarters, or maybe taking back their booty from some Disney-fied store in Times Square.