"Love Me or Lick Me" John McCain 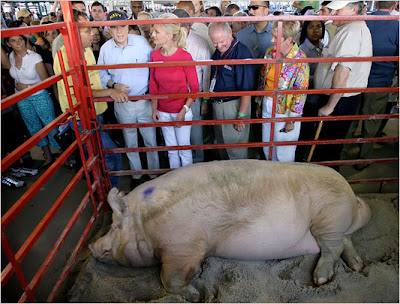 John McCain recently went to the Iowa State Fair in search of a VP candidate.

"Gees, if George can have a Horse's Ass for a VP, I don't know why I can't have a Porker?", the senile septegenarian was heard to say.

"Boy, I sure do like State Fairs! I must admit..... I truly do love Ferris Wheels! It is truly amazing how they go around and around.... and when you stop..... golly... you are right back where you started! Amazing!"


Senator McCain said he was really have a good time on the campaign trail .

"I like the reaction of people. I liked going to the Iowa State Fair this morning. I liked going to Sturgis," he said, making the sound of a Harley revving its engine. "Grrr grrr grrr. I like those things. It seems to me that we're going to ... those kinds of things that are really fun, that I would never be able to do otherwise." 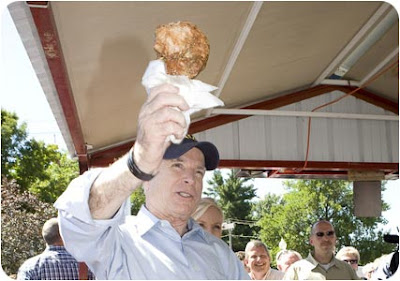 Accompanied by his wife Cindy, McCain also visited a life-sized sculpture of a cow made of butter and ate a pork chop on a stick.

"Anyone want a lick of my pork, "
the affection campaigner said. 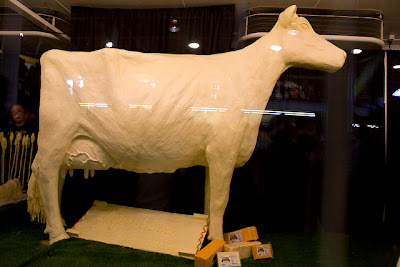 “As soon as I finish here. we are going to try a deep fried Twinkie,” he said.

A cow made entirely of butter
Posted by okjimm at 2:49 PM

cindy definitely looks a little out of place.

you know what, that would actually be a great new campaign slogan: Lick My Pork.

and hey, come on guys, we've really really ya gotta give it up for that *senile septegenarian* ... seems his aricept [sp] (i.e., alzheimer's medication) is kicking in quit nicely.

C'mon baby, lick my pork. I think I'll try that in the bedroom this evening. Nothing else seems to work. Don't be surprised if I vanish.

I think the Green Acres theme song should be the official song of his campaign. I keep hearing it in my mind as I read this post.

Incidentally, is the cow made of butter part of McCain's new energy policy?

Poor Cindy will NEVER get that pig smell out of her favorite Faded Glory designer sweater.

That cow made my arteries harden just lookin' at it. And the veins on the udder - TMI for sure. I may have to switch to margerine...

Do they use cold butter or is it room temperature?

Maybe they should cover McCain with it and stick a wick in his ear. Got a light?

Sounds like McCain has been taking public speaking lessons from Dubya.

McCain is really starting to bug me. His ad's are repulsive, false, misleading, grandoise..........and shitty.

but I really like the cow... I keep thinking of how many muffins I could butter with that thing!

Huge hogs and buttered cows. Ha. What a scene.
I love the expression on Cindy's face as she turns from away from the sow, "Oh look dear, it Jabba the Hut. Remember when I used to dress up as Princess Leia for you?"

You could fit three Cindy's in that porker... poor thing can't even lift it's head. Oh well he can lift his pork chop on a stick.

Anything on a stick, eh?

And the butter cow somehow reminds me of iCarly--good grief, can you tell I've got kids?

You guys probably don't even know what iCarly is.

How long before it goes rancid?

Missy, I can sympathize with you. I know that episode of iCarly, incidentally.