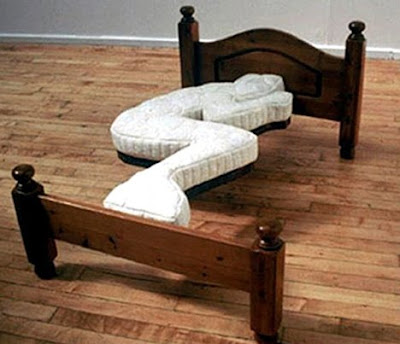 OK. Here's the deal. There was a whole week of job anxiety. And, though I am through it for the most part, I still have this hang-over from my divorce where I can fall into severe depressive moods. And that launches all these sleep-disorder thingees..... none of them pleasant.
Wake up in the middle of the night, can't sleep.... yadda yadda&stuff.

Well, it got real bad. Just like a kid, I had visions of something under my bed. I'ld wake up and have to check under the bed. I have no idea what I thought was under there, but I would wake up in the middle of the night and check. I couldn't get over the feeling that there were dreadful things under there, and I would have to check. Just dust bunnies, odd underwear and mismatched socks. Ya, sounds stupid, but there it is. So I call up the shrink, Ralph, and explain whatza up and that it is killing me and he tells me he thinks he can help in only a few sessions. $300. I tell him I will think about it.

He calls me a few days later.

"Jimm, I am scheduling sessions. When do you want to come in and we will start working on your sleep issues."

"Ah, it's OK, Ralph," I tell him. "I got the problem solved. I talked with my bartender at Oblio's."

"Your bartender? How did he help you?"

LOL! And THAT is why I need my okjimm fix everyday! And where the hell did you find that picture? :-D

A good bartender is worth his/her weight in gold. Or beer.

LOL, man, hell of a bartender u got there.

You do tell the best stories.. and I hope you get the Han Solo desk after all. I think Jabba the Hut exploded last I heard so he shouldn't need it now.

Okjimm- Is your beer frozen yet? I saw the Greenbay temps at 17 below zero (that's BEFORE windchill factors). Yikes! And it's coming my way...Double Yikes!

(I told you, I'm going to keep bugging you, even if you're not here)

Ha! It always makes me wonder why bartenders don't charge for their advice. I guess they must know how grateful I'll become after they serve me a fourth pint.

the beer in my fridge has your name on it

There ya go, jimm...distributorcap admits it, he stole your beer and stuck it in his fridge!

Great. Now where are the terrorists supposed to hide?

Doesn't that make you feel shorter?

Until I get a desk at work, I gotta use the internet at Oblio's to respond..... which means I gotzta make the responses short.... cuts into beer time.

I'm arriving late, but that didn't diminish the story. I loved it! And bartenders (and barbers) are the best underpaid shrinks. I always leave a big tip, but it's nothing like $300...