Love me some football 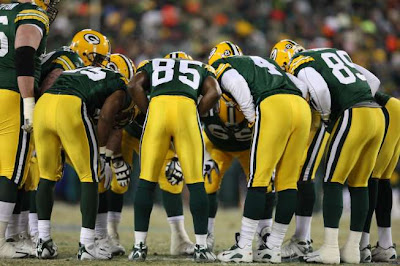 A few years ago I got some free tickets to a Packer pre-season game. They were great seats right behind the Packer's bench. A friend felt he owed me a favor and gave me the tickets on short notice. I had no luck getting in touch with someone to go with, but I did have the phone number of a rather good looking blonde woman I had met and talked with about a week previous. So I called her up and asked if she would like to go. She agreed. Well it was an ok game, but she didn't understand football very well, said she had never been to a football game and was rather quiet most of the night
After the game, I asked her how she liked the experience.
"Oh, I really liked it," she replied, "especially the tight pants and all the big muscles, but I just couldn't understand why they were killing each other over 25 cents."
Dumbfounded, I asked , "What do you mean?"
"Well, they flipped a coin, one team got it and then for the rest of the game, all they kept screaming was: 'Get the quarterback! Get the quarterback!' and I'm like....'Hellooooooooo?' It's only 25 cents!!!!!! "
I screen dates better, now.
Posted by okjimm at 8:43 AM

Is that a statue of liberty play or are you just happy to see me?

I've never heard that blonde joke before. Good one.

Um, did you say something? I was busy looking at the wall of yellow.

&the football talk around here is ridiculous.... Brett Farve, Brett Farve.... when you have one of the oldest NFL teams in one of the smallest markets.....

it helps to have a sense of humor.

Priceless, they were screaming for Favre! Get him back!

It could have been me.. except for the attractive blond part and the fact I've never been in Wisconsin.

I'm with Diva on the QB.

But this week I was humiliated by one of yours. The school Packer fan presented me with a "cheese head hat" due to excessive badgering about Brett Favre.

i surprised she forgot the more expensive halfback