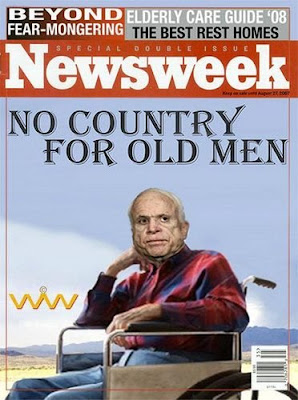 STURGIS, SD
In an effort to improve relations between the United States and The European Union, Sen. McCain made brief remarks before more than 20,000 bikers Monday night at the annual Sturgis Motorcycle Rally.
“As you may know, not long ago a couple hundred thousand Berliners made a lot of noise for my opponent. I will take the roar of 50,000 Sturgisers any day, any day my friends,” McCain exclaimed to roars from the crowd.
"Eich ben ein Sturgiser!", the bemused, white haired campainer shouted.
“I was looking at the Sturgis schedule and noticed that you have a beauty pageant and so I encouraged Cindy to compete. I told her, with a little luck, she could be the only woman ever to serve as both the First Bitch and Miss Buffalo Chip,” he said to cheers. 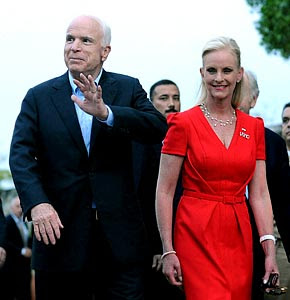 "And you should see the tits on this bitch! They hardly sag at all!", the lecherous old geek was heard to screech.
" And, frankly, I love buffalo chips. I love everything buffalo.... buffalo wings, Buffalo Bob...... and if elected I will work diligently to bring a National Hockey League team to Buffalo, New York. I must say, though, that I particularly like buffalo chips with ranch dressing."
When the Senator was informed that Buffalo Chips are thrown, not ingested, the Senator whimsically replied, " I don't give a shit. Eat 'em, throw em, who cares?" 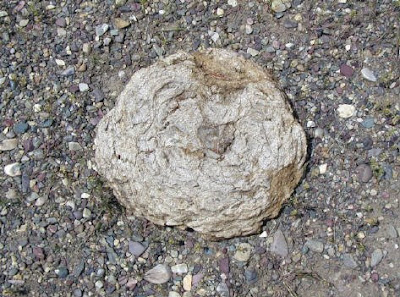 *Buffalo dung is sometimes referred to by the name nik-nik.

It has also come to be used, especially in Lakota, to refer to lies or broken promises
(especially by the U.S. government).
It probably attained this sense by association with the English "BS".
wikki-whatever
Senator McCain is next expected to campaign in British Columbia in efforts to improve ties with England.
Posted by okjimm at 10:40 AM

I really really like McCain, but I am still firmly commited to vote Jood/Nunly.

I think the Senator's wife has great hooters.

I am certainly voting for Jood/Nunly, and it certainly was nice of that old man to go to Sturgis and view the flood damage....but what's a Lakota?

Lakota is a Souix tribe.

I'm voting for Jood/Nunly too, but in the spirit of equal rights for dope smoking Catholics..... can't it be Nunly/Jood for a week?

The Lakota (IPA: [laˈkˣota]) (also Teton, Tetonwan) are a Native American tribe. They are part of a confederation of seven related Sioux tribes (the Oceti Sakowin or seven council fires) and speak Lakota, one of the three major dialects of the Sioux language.

The Lakota are the western-most of the three Sioux groups, occupying lands in both North and South Dakota. The seven branches or "sub-tribes" of the Lakota are Sicangu, Oglala, Itazipco, Hunkpapa, Miniconjou, Sihasapa, and Ooinunpa.


The Lakota Sioux Indians, whose ancestors include Sitting Bull, Red Cloud and Crazy Horse, have withdrawn from all treaties their forefathers signed with the U.S. government and have declared their independence. A delegation delivered the news to the State Department earlier this week.

Portions of Nebraska, South Dakota, North Dakota, Montana and Wyoming comprise Lakota country, and the tribe says that if the federal government doesn't begin diplomatic discussions promptly, liens will be filed on property in the five-state region. Here's the news release.

"We are no longer citizens of the United States of America and all those who live in the five-state area that encompasses our country are free to join us," said Russell Means, a longtime Indian rights activist. "This is according to the laws of the United States, specifically Article 6 of the Constitution," which states that treaties are the supreme law of the land.

"It is also within the laws on treaties passed at the Vienna Convention and put into effect by the U.S. and the rest of the international community in 1980. We are legally within our rights to be free and independent," he added during a press conference yesterday in Washington.

The new country would issue its own passports and driver licenses, and living there would be tax-free, provided residents renounce their U.S. citizenship, he said, according to a report from Agence France-Presse.

The Lakota say the United States has never honored the pacts, signed with the Great Sioux Nation in 1851 and 1868 at Fort Laramie, Wyo.

"We have 33 treaties with the United States that they have not lived by. They continue to take our land, our water, our children," said Phyllis Young, who helped organize the first international conference on indigenous rights in Geneva in 1977.

Means said the "annexation" of native American land had turned the Lakota into "facsimiles of white people."

In 1974, the Lakota drafted a declaration of continuing independence. Their cause got a boost in September, when the United Nations adopted a non-binding declaration on the rights of indigenous peoples. The Bush administration opposed the measure.

Hey Sybil, he should go to the French quarter to improve relations with France. But only if Sarkozy's better half shows up. She's boo-tee-ful.

Oh, goodness, I did not know that Sarkozy had dual personalities!

Are they both French?

Hmmm...I wonder if I stuff my bra with buffalo chips if my husband would be proud of me, too?

Man...first d'cup tricked me into looking at Obama's nipples, and now I come here and I have to look McCain and a pile of shit-and it's not easy distinguishing the two.

I'm voting for Jood/Nunly, too.

I have to highlight you! This was brilliant.

ZOMG! If you had heard as much radio from Sturgis, Spearfish and Deadwood SD as I have last weekend, (I was in Sundance WY) you would know that it's the LEGENDARY Buffalo Chip!

Have a look, if you dare

John McCain can offer his wife up to bikers, have an affair and dump his disabled wife, be much more to the right than Obana, but ain't no thang. Democrats hate Obama so much, and Republicans are so good at supporting their own.. that... well..

Get used to saying it, "President John McCain"

Yep, Grumpy McGruff will be our next president and our next first lady will be "Miss Buffalo Chips"

And I hear that Cindy actually stuffs.

And if it had been Obama who had attended this rally and offered up Michelle, it would have been front-page news, I guarantee you that. As it is, only Olbermann reported this event, and it is now all but off the rader on the MSM.

The Hillary supporters and Bill Clinton are still pissed off re Obama. There is no unity.

I've already resigned myself to the fact that our next president will be John McCain, and then four years later, Hillary Clinton will again run for president of the U.S. I'm pretty sure that this is the goal of many Democrats, particularly female Democrats.

Your commenters are almost as good as your post okjimbo.

is it true what i just heard that if you can't get 200k people to show up at your appearances you appear where there are already 200k people?

dusty...alla my commentors are better than my posts.... it is the reason I bother posting

AnaJo.... my dear friend... we gotza eat some peyote buttons and get you on the campaign wagon. for you...big hugs&stuff

oksusan&okcrow.... I still doan know what I am doing.... seriously..... but I love Canadians.... my brother married one.....she calls it a relationship with a 'Canadian-lite'

McCain has said he wants to drill Cindy off-shore..... I think he means on the bathroom floor.

Speaking of drilling, it would seem that Paris Hilton has become a presidential candidate...

Wow, it does sound more impressive.

Holy crap. I gotta get out more.

You're my new hero.

Sorry Randal, but the potato story got to me.

I have an odd craving for my famous amazing potato salad.

missy...I'm not very good at the hero department stuff....

Hero--sub. You won't believe how long it took me to get that. I'm obtuse.

But ya know, I like yer accent dere, okjimm. Ya sound jus like a Yooper, ya know?

(It don' take much fer dat accent to come back, eh?)

Great story, okjimm... heh heh. Buffalo Chips. Next thing you're going to tell me is that he's going to Vermont to nosh on some meadow muffins for breakfast.