The Best in Life 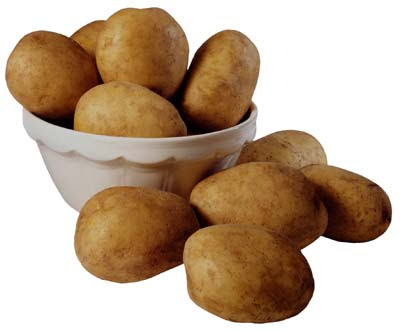 Once upon sometime ago in the desolate dreariness of North Central Wisconsin's sand country there lived a humble, widowed Mother Potato. Father Potato had died a horrific death in the terrible Trans-Fat Wars of 2005, crisped at a young age at Wendy's in Green Bay. His beloved Sweetie-Potato was left broken hearted to raise three young daughters.

The life of a single spud raising three young girls is trying and difficult at best but in the harsh land of the Jack Pine and Burr Oak, amongst the semi-literate raccoons and opposums, trials and tribulations can descend on the heart of even the hardiest of tubers like a death cloud of mosquitos and suck all joy from it.
The sweltering humid summers confound all rational thought like a smothering of gravy and the cruel winter drifts, frigid wind freeze destiny and hope like an Amana Freezer.
Her days were and her years went. The soul of Mother Potato wilted. She could no longer sustain herself and the girls. The struggle and the drudge had become too much. Feeling constantly half-baked, she thought, is no way to live.

So there came a day when she gathered the girls and explained that the time had come for them to go and grow lives of their own. She had taught them as much as she could, nutured them with love, nourished them with miracle-gro during their formative years; it was all good, but time to let go. They were kindly and handsome young Spud women and Mother Potato felt they would do well with a little seasoning from the outside world. 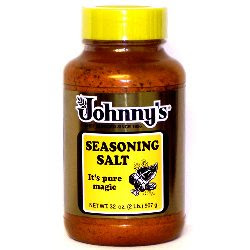 "Take care, My Loves!" She called after them as they walked the lane away from the faded slat board cottage.
" Be good! Watch your peelings! Be careful on the road and don't get mashed!"
Tears welled in her eyes as she watched them disappear into the sunset. Still she called after them, sobbing.

"Be wary of strange Onions! Be aware and look out for evil Garlic and weird Leeks! Trust the Pumpkins and the Squash, but never anyone named McDonald!" 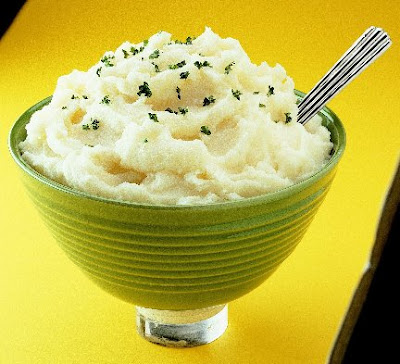 It was the best she could do and it was best that it was done, but still the sadness of the departure and the reality of life without her beloved young ones hung like a fungus around her heart.
Cards and letters would arrive from the girls routinely. Mother Potato drew solace from them. Comfort. She came to feel, deep in her roots, that her own existence had been good, as difficult as it had been, it was still a life full of simple joy, and starch and fiber.
Then, one day, a long and descriptive letter arrived from the eldest daughter. She was well, things were good. She had traveled west and had met a husband- a Baker from Idaho.
"Ah," thought Mother Potato, "a Baker from Idaho! They are great potatoes! Rich in history and horticulture! My daughter has done well!"
Not long after another letter arrived from the middle daughter. She had traveled north and had also found love. A Russet from Antigo. She loved him dearly and they were soon to wed.
"Well," mused Mother Potato. " A Wisconsin Russet. A working class spud, to be sure, and perhaps a little grainy, but all-in-all, dependable, reliable folk. She will be taken care of and loved."
Then, in good time, a third missive arrived from the youngest. Her best and brightest. Her gem and joy. She had traveled east to the big city and there, amongst the bustle and the butter, had also found romance. An enclosed photo showed a young Spudling gaudily adorned with parsley and chives. Looking somewhat racy.... Frenchy-fied. The letter explained that there would be no marriage with the man she had met.... it was an affair.....with Bill O'Reilly! 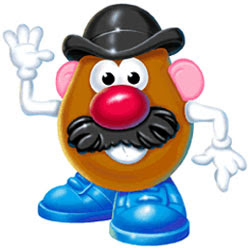 ...and I'm feeling a little hashed and browned after that story. Holy mother potatoes! From what corner of the brain did you conjure that one? LOved it.

I'm not sure what to think about this post. Were you craving french fries when you wrote it...just hungry?

I must say, however, your depiction of Bill O'Reilly as a potato (one without substance and flavor) is great! It must be all that Wisconsin beer and cheese that brings out the genius in you. ;-)

This might be the greatest tuber stuck in the tubes since potatoes first started walking upright.

That was GREAT!!! A true mid-western tale, spun from the heart.

"Feeling constantly half-baked" ... hmmmm ... I can certainly relate to Mother Potato. And I'm no mid-western girl, to be sure! Who knew?

A tiny, tiny question, however, Sir:

what about horseradish? I love a little bit o' the hot stuff it mixed with my mashed.

Whoa, nellie, no wonder you're in charge of refreshments. Nothing but a common tater, indeed. Of course, one could always drink potatos. Vodka doesn't smell, and has no taste.

Sounds like someone mixed his painkillers and beer even though Liberality told you not to.

Glad the muse bit you.

ok, but he's a bad commentator! Full of bruises and bad parts that need chopping off or peeling away. Oh heck, the whole potatoe is bad!
haha...

Spartz... my brain has no corners...I am a well rounded guy

Anita... I love horseradish....never tried it in spuds.... garlic &bacon mashed potatoes, twice bakce with a little chives on top.... wowsers...need to open a restaurant...Spuds R Us

Gees, Randal, you're correct...McCain is rather like an erect potato....

Nah, Dcup....all done with painkillers....they screw up my stomach and fuck up my head...just a few to get through the first couple of days....got rid of the crutches yesterday.... it'll just be a pain for a bit

You're correct, Libs....Riley is badly compostable and listening to him makes me sick... he is a bad spud

"Conan, what is best in life?"

"To chop your potoatoes, see them whipped before you, and to hear the lamentation of O'Reilly!"

This is what happens when you have to work late.

Damn, I feel Mother Potato's pain, even though I have no children of my own.

It takes some degree of finesse to not be mashed and to watch ones peelings! Indeed!

And yes! Those strange onions and evil Garlics...Oh, there are dangerous things to look out for on every corner. You're right, though.. the evil McDonald... SCARY!

And yet, yes, the simple joys... I so relate to Mother Potato!

And yet, what?! An affair with O'Reilly? Oh jimm! I am already dismayed and worried. And now I have to worry about O'Reilly ruining this lovely tale?! Oh my!

I too will wither and die along with Mother Potato.

Oh shit, you must update this tale of doom and gloom!

Might the youngest daughter meet a young stud, uh spud, and live happily ever after?

Did you make all of that up? I'm blown away.

Bill Orally always seemed a little "baked" to me! No I have proof...

Ms Blue.... the story genisis is a very old joke my father was fond of telling. I, ah, embellished it just a wee bit.

UC.... yuppers, love them there taters!

boy do you make me laugh