Because I felt it I believe it 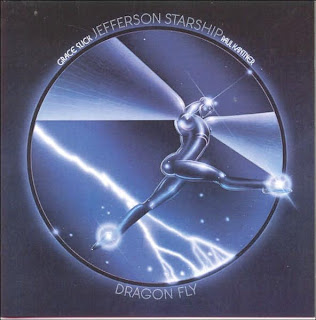 The concert at Waterfest was rained out last night. I had really wanted to check out Sonny Landreth. The Iguanas were on the bill, too, but I had no desire to hang out in the rain. It was the second show this season that was rained out. So it goes.
Ok. The thing of it is, while walking home in the rain a line from a song just jumped out of nowhere,
....gotta be careful, lyrics that hide behind bushes and jump out at you care be dangerous......
"And if it rains again tonight.."
and I was taken away by one of my favorite rock ballads, Hyperdrive by Jefferson Starship from the first Starship album in 74, Dragon Fly.
The album really kicks shit, but the song, Hyperdrive in my estimation, ranks right up there with Layla as a rock ballad. The band had reformed with Kantner and Slick adding Craig Chaquico on guitar with Papa John Creach doing electric violin. Their work on Hyperdrive still blows me away. The lyrics, though, are so evocative of a life in despair and the resiliency of the spirit to get through the despair. It is a poem that can stand by itself.
I haven't learned to make nifty links...and if you are not familiar with the song
http://www.lastfm.fr/music/Jefferson+Starship/_/Hyperdrive
Hyperdrive
Jefferson Starship
I never thought there were corners in time
Till I was told to stand in one
One straight line head on into the other
Maybe standing in the corner looks like where it's got to come.
But I pretend one wall is the past and one is the future
And I just stand here like the present looking for a Good place to run
Every fish that swims upstream now that's a catch
Because the full mouth never wants to stop cooking.
The map may be flat, the globe may be patched
But the long line keeps right on hooking
Circles in the ring of fire, where do you go
On a night that is clear and warm?
Oh where do you go?
I never thought there were corners in time
Till I was told to stand in one
I've heard circles moving right through corners
And they don't even know they've been around and around before
Ringing, ringing against each other on a singing chain
Like a flying magnet hyperdrive has never seen any reason
To remain the same.
Because I felt it I believe it
Because there are things I've never seen that I believe
So I'm going to place my face right in the triangle door
Till I can move right on through instead of just standing here
Looking at the floor.
And If it rains again tonight, I can think light years ahead
Or I could put myself back a thousand years ago
As if I'd always been here before or as if I am still to be born
I'm a slow loser, but I'm a fast learner
That much I know
Anyone can go
That much I know
Anyone can go
That much I know
Anyone can go.
Ok I need to get some work done before I leave this afternoon.
jimm
Posted by okjimm at 8:05 AM

Wow, sometimes you are so deep. I love this song, too, and until this morning had put it waaaay to the back of my mind. Thanks for dusting it off and bringing it to the forefront.

Oh, and that rain you got must have been what hit us last night. I couldn't believe when I looked out my window in the kitchen, the HUGE wall cloud over our house, complete with swirling clouds and updrafts. I was waiting for a freakin' tornado like the Wizard of Oz to drop out of the sky. The good new was, it dropped a huge amount of rain on my dry grass that I thought was going to have to be watered today.

Enjoy your weekend, kiddo. I hope you have sunny skies, low humidity, and no mosquitoes. Of course, we all know that if one did get you, it would fly away feeling like he just drank a cool one.

Au revoir, and have a great time. Hope you have some great weather. My daughter told me you guys got pounded yesterday - after all, it is Tornado season.

Links are easy to make. Just take some animals, kill them, grind them up, stuff the ground up stuff in some intestines, et voilà!

What are you still doing working? Go away and have fun!

I am so sorry the show got cancelled. Nice tune. It's been ages since I heard it.

Jimm, I'm glad you have a blog. You are a natural born blogger, you know. Always something relevant to say.

Yeah, I hope you have a good time and all the good things wished for you. I can't think of anything to add to the comments that haven't been said better than I could manage.

We all have our ways of chilling and mine is that I hope to get some drawing done so a new story can appear soon. I'm not allowed to write one without pictures.

Jimm, what I really like about you is that you know how to have fun. How to just exit from the sturm and drang of day-to-day life and get out in nature and let go. I think that is seriously cool.

When you get back, stop by my blog. I've dedicated a post to you!!

Yeah, can you believe it!!!

Hey, the weekend is over and you best be writing your new post. I'm waiting to see those pictures of you manly men camping.

Wowsers! It was a great time! I really appreciate all the hugs&stuff. I left my camera at home and used Tim's. He will be downloading more today. I had to take the afternoon off....I have a load of laundry that smells like woodsmoke and damp lake water. The raft trip is awesome. I haven't done it in years. Hopefully the photos will be good.