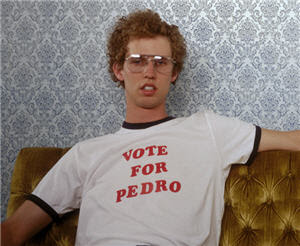 Well, the first round of recall elections in Wisco are over.  The Dems picked up two State Senate seats.  There are still two Dems up for recall, elections next week.  Stuff.  Most telling... in my senate district, Jess King defeated the incumbent Repub.... significant primarily because a Democrat has not represented the district in about thirty years... and no woman has ever before won in the District.  Hmmmm.

In other news.... I haven't shaved since Sunday... and no one has noticed, or they are too kind to say something.

The price of gas has gone down....  now let's work on the price of beer.

I have discovered 1001 variations in the making of Ramen Noodles.... poverty can spur the imagination.

Still wondering WHY "Ice Road Truckers" is on the HISTORY CHANNEL .... like, gee whiz, have we run out of history this quickly?

The penguin is an endangered bird in Wisconsin.... so if you see one crossing the road... don't run it over.

Don't tell secrets in farm fields... the corn has ears.

....... and... lastly.... every man woman and child in the State of North Dakota (plus two folks in Manitoba) has decided to run as the Republican Candidate for President in 2012

Several people have weighed in on the History Channel over at Infidel753's blog. I for one can't understand why this non-historical, reality show fluff is on a network that is SUPPOSED to be dedicated to history.

I can't tell you how disappointed I was at the results in Wisconsin, even though (like you said) the recall put two more Dems in office from Republican districts. The level of outrage and national focus on those recall races could have spurred a resurgence of the party... instead, it's just another in a long list of depressing "oh so close" moments.
Sigh...

Ahab... will have to check his out... been off the blogs, pretty much, of late. Outdoor weather... and I am loving it.

Squatlo.... good news is voter turn out was very high, with only one ticket on the ballot and... and election in August! A good %20 of Wisconsin is on vacation in August!!

Squatio needs to see the glass half full, not half empty. this really was a win for Wisconsin Dems....


I was gonna leave just a simple 2 word comment til I saw Squatio and had to reply....

It's been a while, buddy. Apologies for not getting over much of late. Holiday, family, work and editing The Flash Fiction Offensive have eaten so much of my time. I'll try harder!

I'm all out on politics at the moment. While our cities are being burned and looted and innocents are being mugged and beaten to death, our so-called leaders are locked behind closed doors "talking" about what to do. If they don't know now they never will. At this moment in time I'm ashamed to be English!

Hope all is well with you, my friend.

I'm a glass-half-full kind of person usually, so I'm going to look at the effort by the Wisconsin folks in a positive light - as a sign of what's to come in 2012. The Republican machine in Wisconsin was well-funded to put down this "insurrection." Maybe not so in the coming election. Hang in there. Have hope.

Okjimm - I can't support your hair growth without a photo!

Many good, dedicated people worked something of a miracle in Wisconsin. They have my admiration and respect. The two state senate victories are a big start. Making Scott Walker an unemployment statistic would be an even greater coup than flipping the state Senate. I hope that will be the next victory.

i am by no means a glass half-full type of person, but even though i was disappointed initially, because the senate didn't flip, after i thought about it, i realized that what had happened was historic and wonderful. there were 2 victories and some close elections in conservative districts. that's pretty remarkable.

The best recurring thought is the recall elections will spur more moderate Republicans to buck Walker's agenda.... that would be the best deal yet.

SDS.....lemmee see if I can find a pic blog appropriate...