SO... what's all this World Cup stuff? 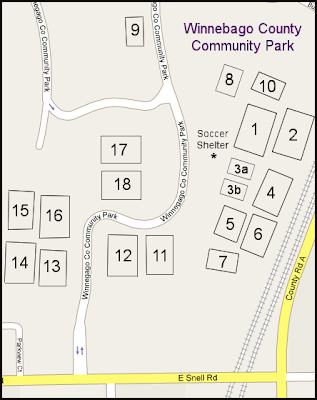 About 40 years ago they took a hunk of mostly marshy land a couple of miles north of town, leveled a bit, filled a bit, added a few trees, some baseball diamonds and soccer fields and with an elan peculiar to my part of the world gave the place the singularly notable name, County Park.
They are good with names here.

This Saturday, for the 33rd year in a row, they will fill the place with kids, about 1,700 of them, and hold the annual soccer tournament. In another impressive display of innovative thinking they call the event, Soccer Saturday.
They are good with names here.

Forget apple pie, baseball hasn't got a chance.... this is America.  It happens all over.... cities and towns holding soccer tournaments.  And listen, if you need a good grin for your heart, there is nothing like watching a bunch of 7yr old boys or girls kicking a a ball up and down the field.

Twenty years ago I was a soccer coach for a U6 team, my son's.  The primary goal in the job was to instruct them on which way to run and that after the half, we would run in the opposite direction. Mostly I was successful.  Two years later I assisted coaching my daughters U6 team.  There the primary goal was to teach the defenders that it was not OK to sit and pick dandelions with the other teams goalie.  I was only marginally successful, but the fun factor, for me.... was even greater.

Our local private organization that runs the deal, with another bit of naming panache, is called.... the Oshkosh Youth Soccer Club.

The OYSC is a recreational program. The youth and their enjoyment of playing, as they are learning the game, is the primary objective of the program. The OYSC strives to put an emphasis on learning and having fun vs. winning or losing. It has been a consistent policy of the OYSC Board of Directors to provide a soccer experience to as wide a range of youth as possible. Every player has a right to play regardless of their skill level. 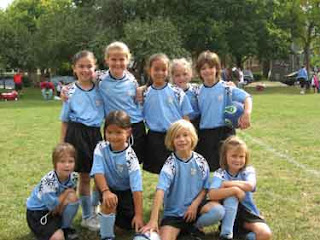 Well that is a concept I can get my head around.  So for a few years I would get up early on Soccer Saturday, pitch a shade shelter, haul out tubs of ice full of of watermelon, make sure there were orange slices and pretend I was a coach. That took a lot, trust me.

"Do you believe in magic in a young girl's heart"

... and I do.  You cannot watch kid's playing soccer for a whole afternoon with screaming Grannies and Dad's and Mom's... you can never get over a girl who will NOT take her uniform off after the day is over....who falls asleep clutching her trophy instead of her blankie, who looked like, even at such a tender age, like a World Killer.
A Dad cannot get through a day like that without thinking that Life is OK 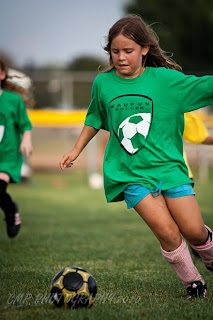 Now, some of those girls have long since given up playing the game.... and some haven't....but that isn't why they played in the first place.....

I knew it, you're a foppish Euro communist!

Such a fake curmugeon (sp). You are such a softy. lol...nice post friend.

that was so sweet.

a few weeks ago, i went to watch my 5-year-old twin neighbors at soccer practice. i nearly died from an overdose of cuteness.

For what it's worth, I should be out in the field watering my cucumbers and preparing for a week long heat wave of Arizona proportions but it is all worth it when I read your blog.

LMAO @Randal's comment. But I do love these types of posts from you Jim..like me you are an olde softie when it comes down to it and although we try to hide that personality trait..it does come out on occasion.

Except for the subject-verb agreement issue in the OYSC's mission statement (kinda like fingernails on a chalkboard to me, which isn't even a valid analogy any more)....I know magic when I read it.

And when I see it. For us, it's our daughter on her horse.