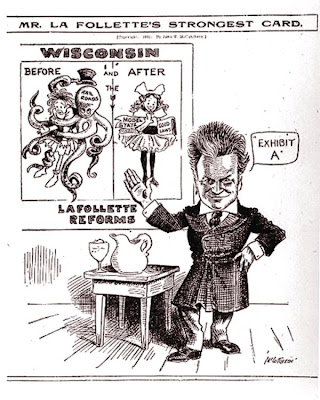 Last night the Wisconsin State Senate rushed a measure through that effectively ends collective bargaining in the state.  After a month of declaring that the "Budget Reform Bill" was about balancing the budget and not endlin Unions.... they removed the 'collective bargaining portion from the spending bill, a move that eliminated the quorum and thus eliminating the approval of at least one of the elusive fourteen Democratic State Senators.  It was over in less than 30 minutes, no discussions.  It apparantely also violated rules established under the Open Meeting Law.
At Least the truth was finally out in the open.... this IS about Union Busting!  The State Republicans slammed it through and then fled the Capital. The Governor was no where to be found... The vote was, amongst the Republicans, 18-1.  The Democrats are still in hiding. There was one Republican with a conscience.  Today at 11 it goes to the State Assembly, which has shown some dessent amongst the Republican majority.
It was late afternoon when the news hit.  The Capital was immediately deluged with rejuvenated crowds of protesters.  In my little chunk of beautiful Wisconsington the rallies are at the Monument Square, the busiest intersection downtown.  There are about forty of them there now as I type this at the coffee house... soon, ... at least forty one will be there.  There will be more there tonight.
It's peaceful.  Cars driving by honk in support.  Now, there is a code to the honking.... a series of short and long beeps, not unlike a Morse code.... it means.... "This is what Democracy looks like".  I think it started in Madison.... but you can hear it here.  And the small crowd chants along.  And the city bus drivers honk it..... and so did a garbage truck driving by.... and a fire truck. 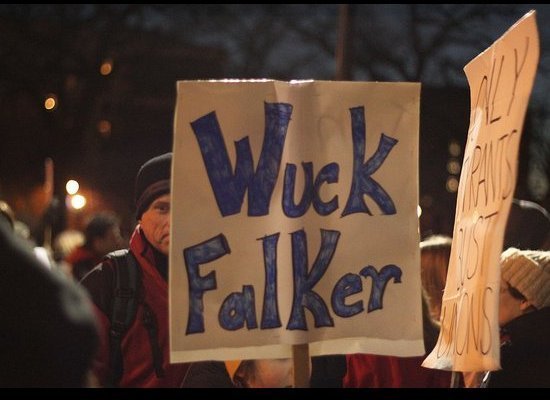 Walker is simply awful. What a demagogue you have gotten mixed up with. I understand that it will be illegal to strike and subject anyone thought to be a striker to immediate firing. Whatever you guys do..we are behind you. Maybe we can strike for you?

part of me wants to cry and part of me wants to come to Wisconsin and march.... Like the 14 said, this has to be taken to the polls, in the meantime RECALL the bastards and in a year throw Walkerfuckwad out on the street with a steel toe workboot up his butt crack!! Damn I'm so pissed I can't function!

This is just the end of the beginning. Now it's on!

I am not surprised at all. They can't do anything legally so they resort to tricks and lies. Cowards, boot lackeys, corporate whore mongers.

The only good news about all of this is that at least now everybody knows who they're up against. Thank goodness for Wisconsonians.

I am not surprised at all. They can't do anything legally so they resort to tricks and lies. Cowards,

This is not over... recall petions go forward... we will be electing a new Supreme Court Justice.... and there will be an election in May to replace assemblymen appointed to Walker's cabinet... all Republicans.