I saw a report... somewhere.. that 75% of Americans stop believing in Santa Claus by the Age of eight.
I am aghast! Well!! I would like to put in a good word for us, the loyal 25%, the True Believers!!!! Why, just a few years ago, visiting at my sister's home for Christmas, I experience irrefutable proof that Santa, bless him &love him &stuff, does truly exist!!!!!!!!!!! 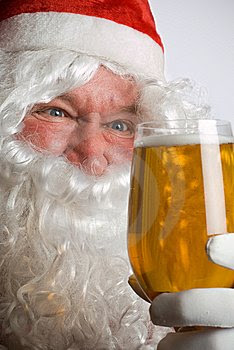 The house was settled, all the children asleep..
I had a six pack of pale ale,
good company to keep.
I wished to speak with the old Elf
tell what I thought
but it had been a long day
from all that I had bought.
I was tired, I was pooped.
As I pondered what to say,
My head began to sag
my eyelids to droop
soon I passed out
all in the bag.

When I awoke the presents were there
An MP3, books&CDs, merriment and glee
toasters&cookbooks, chocolates &tea
socks and sweaters, a new football for Bob
for Jonas, the nephew, finally a job!
Snow tires for Max
to put on his car
earmuffs for Miriam
&marmalade by the jar.
An almanac for Uncle Bill,
Spices for his wife....
Who'd a thunk they'd still be wed
this late in Life!!
Now your opinion you may venture
expostualte as you will
But I'm a True Believer
................
until I get the bill!

So There!
& just remember, everytime a bell rings an Angel gets jimm a beer! 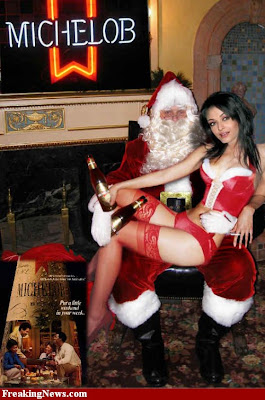 Half naked sexy people dressed in Santa outfits on everyone's blogs. I love this time of year!

off topic -- i love the hanging santa

on topic -- you mean leaving cookies on the mantle doesnt work?

Leave me beer on the mantle with the promise no one will drink it and I will play Santa for you. Shoot, I'll even believe in Santa again because he would be the only person from Long Island to Wisconsin and back without pissing off Skippy.

What anajo said. More half naked sexy people gets the mind off the horrors of Xmas.

In my house when the kids were little, Spartacus used to tell them to leave Santa a beer instead of milk. Maybe Sparty would have dressed up as santa more often if I had an outfit like the lady sitting on his lap.

no cookies on the mantle no longer cut the stuff,DCap.... this Santa needs a six pace or a couple of doobies.

Anajo... I tried the naked Santa thing.... worked once and I kept getting arrested after that. Naked reindeer work better.

Spartz... believing in Santa is akin to believing in okjimm. We are both mythical drunkards. Red noses doan grow on trees, just saying, n all.

Randal has gott it. I hates xmas. I spend all my time, all my money, all my love trying to making other folks happy..... and I always seem to be a pint short.

You da man dude. It's why I gives you the blog roll love. Think of it as a yule log.

Forget Santa. I believe in the girl on his lap. Hubba!

The hanging Santa is so cool.

How about a flat Easter Bunny with tire tracks on him? For me?

God I LOVE the hanging Santa.

Dude, you are so warped, but thats why I heart you. ;p