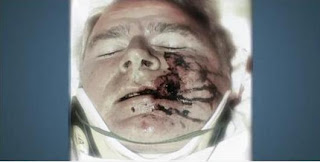 oh gees, I gotzta go buy some rolaids.  I have heartburn and need some help..... I'm not calling Scotty, though.  I wonder if Tom will be around next January
Posted by okjimm at 12:33 PM

Republicans--good at helping themselves by screwing you over!

You're right, I'm sure - Walker would've never tried to help anyone unless it was to his own benefit.

Liberality and Maugirl nail it perfectly. Barrett is the kind of person you want in public service because he obviously cares about people.

Walker is just as obviously the kind of person for whom public service is an alien concept. He's out to advance his own career, to stoke the profits and personal fortunes of people who can contribute large amounts to advance his career and to impose the perverse radical-conservative ideology on everyone.

I hope everyone in Wisconsin who's not a among the 27 percent who think like Walker realize what a mistake it was to give this lowlife the levers of power in their state.